Who Is The “Tree-Hugging…Liberal Jew From L.A.” At Fox?
soundbite

Who Is The “Tree-Hugging…Liberal Jew From L.A.” At Fox? 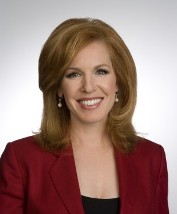 “I am what some might think would be the least likely person to be at Fox — a Berkeley graduate, tree-hugging, West Coast, free-market, liberal Jew from L.A. who puts bricks in the toilet to save water,” said the Beverly Hills native with a husky laugh that would make Mae West proud. “But I like the attitude and personality of this place.”

One of the first anchors from another network to join the young Fox Business Network in 2007 was Liz Claman, who came over from CNBC. This week the Los Angeles Times profiled the star at FBN, who revealed a bit about her “tree-hugging, West Coast, free-market, liberal Jew from L.A.” background.

She also talked about her interview style. Yahoo Chief Executive Carol Bartz told the LAT: “As soon as I heard that Liz would be conducting the interview I signed up. Some people feel that they have to jump all over you but that doesn’t make for a good interview. Not Liz, she charms you into confessing everything.”

Claman agreed. “I do ask the tough questions, but I’m not in your face, I am not trying to make news myself,” she said. “I think a lot of broadcast journalists get confused, particularly in cable, about what is the real story. Is it you, or the people who made the news?”