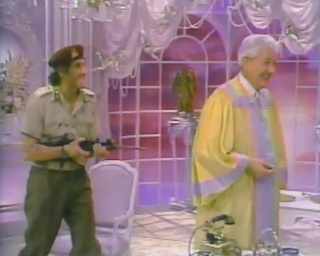 Well, it appears that Muammar Gaddafi’s reign of terror is at an end. For decades he’s ruled over Libya with an iron fist. For perspective, realize that, a joke about him dying in a sitcom made all the way back in 1987 got a thunderous applause from the audience. Pretty crazy, huh? What’s even crazier though, is that that sitcom actually predicted his death as happening in…you guessed it…2011.

For some reason, 2011 was a good futuristic year for the entertainment world to set predictions in. And the strange thing is some of them have come true.

The sitcom in question was called Second Chance. It aired for one season in 1987 through 1988. Here’s the premise from Wikipedia:

“In its original format, the show starred Kiel Martin as Charles Russell, a deceased man, and Matthew Perry as his younger self, who is nicknamed Chazz. In the year 2011, Charles dies in a hovercraft accident, and his soul is promptly sent to the high spiritual palace of Saint Peter (Joseph Maher). It is there that Saint Peter determines that Charles is too good for hell but not good enough to get into heaven; therefore, Charles is sent back to Earth in the year 1987, to re-join his life during the teenage years in order to help himself, through the younger Chazz, make more moral choices.”

In the first scene of the pilot, set in this wacky space-age year, we see Kiel Martin’s character arrive at the Pearly Gates for judgment. However, before he does, Gaddafi gets his chance. Quote St. Peter; “Ah, Colonel Gaddafi. Dead at last.” Gaddafi is then condemned to be a human bomb in Hell, blown up every two minutes. Cue rapturous studio audience applause.

Side note: Do you think an actor goes through an existential crisis when they realize they’ve played both the young and old sides of an age-swap story?

Watch the scene in question below. The Gaddafi stuff begins around the 2:20 mark. Although, please feel free to enjoy a bunch of wacky “dumb beauty pageant winner” jokes beforehand: