Who’s More Dangerous To The GOP: Obama Or Glenn Beck?

Who’s More Dangerous To The GOP: Obama Or Glenn Beck? 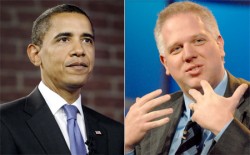 Anita Dunn, the White House communications director who is leading the Obama administration charge against Fox has revealed that the decision to become “more aggressive in both protecting our position and in delineating our differences with those who were attacking us” was a “fundamental” one that was made in August. Short version: right around the time the health care bill was being dangerously derailed by the town hall-ers and Van Jones was being done in by Glenn Beck. Point being, this wasn’t necessarily a case of the White House losing its temper, as has been suspected, and acting rashly (and arguably, stupidly).

This from a two-part series Politico is running:

President Obama is working systematically to marginalize the most powerful forces behind the Republican Party, setting loose top White House officials to undermine conservatives in the media, business and lobbying worlds…Obama aides are using their powerful White House platform, combined with techniques honed in the 2008 campaign, to cast some of the most powerful adversaries as out of the mainstream and their criticism as unworthy of serious discussion.

Whether they will be successful is another question. One already gets the sense that there is a backlash in the works about the administration’s blanket dismissal of Fox as a news organization — shows at 5 and 9pm does not an entire network make. However, perhaps Obama is just taking advantage of where the wind is blowing.

A staggering 83 percent of all independents surveyed said they don’t trust Republicans to make the right decisions. It’s impossible to credit the Obama White House for these numbers, however. Republicans can claim the bulk of the responsibility after a decade of scandals, unpopular wars, unprecedented spending and a broad loss of public trust.

Much has been made of the GOP’s lack of leadership in the last year — it’s a huge void that appears to be currently being filled by the likes of Glenn Beck (and shortly, Sarah Palin). As popular as Glenn Beck is, long-time Republicans are not thrilled at the prospect of having Beck and his cohorts speak for the party at large. So perhaps Obama’s decision to treat the shows at 5 and 9 and opponents (and therefore equals on some level) really is the quickest way to delegitimize the party and convince a whole lot of people the inmates have taken over the asylum.