Why Standing Rock Is About Way More Than a Pipeline
Opinion

Why Standing Rock Is About Way More Than a Pipeline 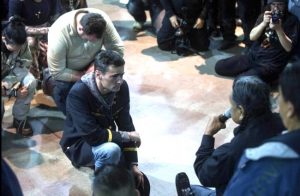 Growing up in a land of white privilege on Long Island, I had it fairly good. I wasn’t rich nor poor; I was middle class with two loving, working parents.

Neither my family nor tribe of relatives were slaughtered; my land wasn’t stolen in the name of another race and class colonizing their own country from the burnt ashes of mine.

So when I first arrived in Cannonball, North Dakota in September for what would become the first of five reporting trips, my world shook. Interview after interview, all the melodrama I’d ever built up in my head about my own experience ceased to matter.

Speaking with hundreds of Native American water protectors at Standing Rock over the last four months, a heartbreaking trend gnawed at me: where I was shocked and shaken, indigenous people were numb and utterly unsurprised.

After all, this was the centuries-old story they’ve been forced to endure.

That’s why December 5th, 2016 will forever be an historic day. That’s when veterans, led by The Young Turks host Wes Clark Jr. and contributor Michael A. Wood Jr., kneeled down and begged Native American tribal leaders for forgiveness for the original sins of the United States.

“We came here to be the conscience of the nation,” Clark Jr. began while kneeling in front of Native tribal leaders during a forgiveness ceremony.

“Within that conscience, we must first confess our sins to you because many of us in particular are from units that have hurt you over the many years. We came, we fought you, we took your land, we signed treaties that we broke, we stole minerals from your sacred hills, we blasted the faces of our presidents onto your sacred mountains, and we took more land, and then we took your children, and then we tried to take your language, we tried to eliminate your language that God gave you and that the creator gave you. We didn’t respect you, we polluted your earth, we hurt you in so many ways, and we’ve come to say that we are sorry. We are at your service, and we beg for your forgiveness.”

In the endless drivel that is our corporate-media-horse-race-industrial-complex, those inside the bubble might read that and indignantly shout, “Who gives a damn about the plight of the Native Americans, President-Elect Trump just tweeted he’s going to bomb Scandinavia because the Prime Minister didn’t like The Apprentice!”

Here’s why you should care: America just elected one of the most unqualified, potentially diabolical presidents in history because of a frozen, deep despair; an anger and hopelessness that’s quietly swept across the country over the last 30 years.

The raw emotion and frustration that sprung a man like Trump into office came from the never-ending dark cloud that poisons America: unfettered greed and heartlessness; a type of social Darwinism fired by the plutocratic elite at average people—those with far less of a voice or chips to gamble into the corrupt pot that’s become America.

Of course, we have to be vigilant and steadfast in trying to achieve equality and respect for all groups, minorities, and people attacked by corporate, economic, and social colonialism, including our African American, Latino, Asian, and LGBT brothers and sisters.

This is especially vital as incoming forces inside the White House, and those supporting them, try and rewrite America into their diluted concept of what makes it great.

But, of all the historic lessons to take from the epic battle of Standing Rock—one that is still not over despite President Obama’s decision to deny a crucial final drilling permit—we can ironically learn one courtesy of Trump.

For, on election night, when he promised to rescue the “the forgotten men and women of our country,” he was unknowingly talking about the group thousands of brave veterans from across the U.S. just kneeled down to in a genuine desire for forgiveness.