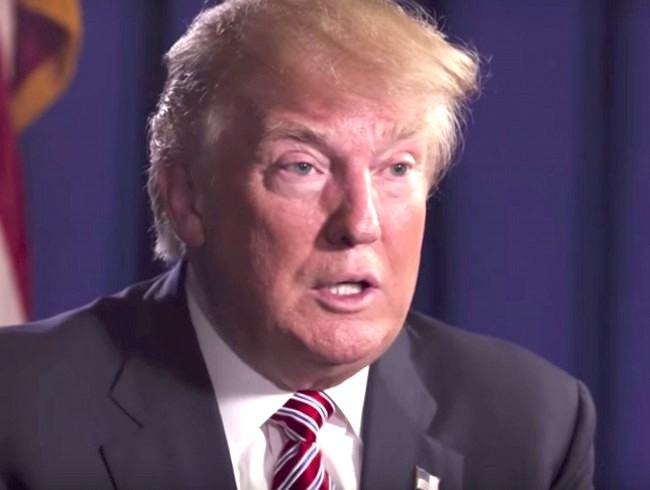 All of a sudden media pundits and reporters are clamoring for the release of Donald Trump‘s tax returns again. Why? As it increasingly and somewhat surprisingly looks like it’s the Hillary Clinton campaign (and not Trump’s) that is flailing and spinning out of control, those in the news media are assuming the position in the presidential selection process in which they are most comfortable: aggressive defensive tackle for the Democratic nominee. If Hillary can’t bring the ball across the finish line herself, intrepid journalists see themselves as the last line of defense between Trump and the apocalypse (aka, Trump winning the election) and view bringing down Trump by any means to not only be a necessary pursuit but also a noble one.

This week CNN’s Christianne Amanpour, who apparently needs to invest in new business cards since her current ones reading “unbiased journalist” are now outdated, unabashedly declared Trump to be under-qualified, but perhaps even more disdainful given her tone, a “man!” Meanwhile, Amanpour deified Clinton as an over-qualified, over-worked woman who has unfairly been forced to endure the thankless campaign process of convincing voters to vote for her. Amanpour seemed dumbfounded why Clinton’s appeal and superiority is not as obvious to all voters as it likely is to her sophisticated and intelligent circle of “girl-power” friends.

Furthermore, MSNBC’s Morning Joe, once the best way to start your day for fair, insightful and entertaining commentary on the day’s events, has experienced a depressing transformation. Now the show alternates between being a campaign strategy session for how to get voters to like Clinton more as Mika worries Hillary doesn’t boast about her accomplishments enough, and a grief-counseling session for Mika as she tests out new and varied pained expressions while worrying why voters aren’t as offended as she is by the latest Trump comment. As for Morning Joe himself, he sadly seems to be relegated to a backseat passenger in Mika’s Morning roller coaster of emotions.

Plain and simple, Trump should never release his taxes, because to do so would mean providing the ammunition for an army with its artillery squarely aimed directly at him. Reporters are salivating at the chance to sink their teeth into possibly endless negative news stories they could concoct with every morsel of information available on the page. Thankfully, despite reporters’ best attempt to dig up a disqualifying fact about Trump or to convince voters that Trump’s lack of transparency should be catastrophic, voters are correctly ignoring the media and not punishing Trump.

Each of the conspiracy theories regarding why Trump might not want his tax returns available for public viewing is more ludicrous and more irrelevant to voters than the next. Let’s quickly list them and just for fun, let’s take a page from Trump and irk his toughest critics (the media) by using just one sentence to quickly justify why, even if true, voters shouldn’t and wouldn’t care about each of these supposedly big scandals lying dormant in his never-to-be-released taxes.

One Sentence Rebuttal: Biggest philanthropist is never a deciding credential required or desired in a presidential candidate, but even if on paper there is no evidence of Trump’s charitable giving (doubtful), Trump has led seven seasons of Celebrity Apprentice which did nothing but raise millions for tons of charities and just this year Trump very publicly raised millions more for veterans groups!

Conspiracy Theory: Trump Is Worth Far Less Than He Claims!

One Sentence Rebuttal: Trump’s underlying credential in the eyes of his supporters is not that he’s a billionaire, it’s that he’s a success, meaning that even if he’s not worth billions (doubtful), no tax return can deny these facts: he successfully established a well-known, yet to be punctured auspicious reputation for being financially triumphant in endless endeavors, he successfully earned more votes than any other Republican ever before in the primary process and he continues to successfully communicate issues voters are passionate about every day.

One Sentence Rebuttal: If paying more taxes than one legally has to is a badge of honor then I’d love to hear why, but otherwise given the existence of tons of perfectly legal real estate loopholes that Trump likely takes advantage of, the fact is obvious that he probably pays very little, so unless he committed provable fraud (highly doubtful, otherwise what’s the point of an IRS audit if they have yet to discover such fraud), then to quote Trump super-fan, The View co-host Joy Behar (sarcasm intended), “So what, who cares!”

One Sentence Rebuttal: Trump has financial interests all over the world but even if his Russian ties are the most personally important to him (doubtful and laughable), here’s a newsflash: being president of this country would obviously trump the rate of return his Russian investments are earning; therefore, if you’re wondering why Trump is so complimentary to Putin just be happy believing the simplest explanation: Trump has good manners and is cordial with anyone who is cordial towards him!

Concluding, if Trump was running against the most transparent candidate in history, the call for him to release his taxes would at least be partially justified. However, given that he’s running against someone who would hesitate to even reveal what her favorite color is or what she ate for lunch, Trump’s team should realize that given there is zero political gain to releasing the taxes, their new response to inquiring reporters should simply be: “it ain’t happening, next question!”