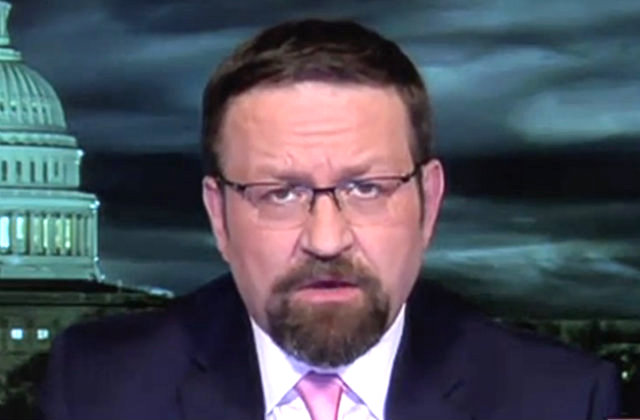 Trump advisor, and man who looks/sounds like a 1990’s James Bond villain, Sebastian Gorka wants you to believe that only Muslims engage in terrorism and that when Muslim Americans are attacked it’s a likely false flag operation. You can see why this guy is a perfect fit for Trump.

Gorka, a man who blocked me on Twitter months ago after I called him a human punchline, shared his views on terrorism Tuesday with MSNBC anchors Ali Velshi and Stephanie Ruhle. There, Gorka served up a few whoppers that likely play well in Trump world but add to why a recent poll finds only 24 percent of Americans believe what they hear from the Trump administration. (There’s a delicious irony in Trump having turned his own administration into “fake news.”)

First, let’s not whitewash Gorka’s rancid history since it’s relevant to his views. The Forward recently documented Gorka’s co-founding of a political group in Hungary in the mid-2000’s with two “former prominent members of Jobbik, a political party with a well-known history of anti-Semitism.” Gorka has been criticized for wearing to a Trump inaugural ball a medal from the Nazi linked Hungarian nationalist organization Vitezi Rend.

And there are questions about Gorka’s academic credentials.

To all of this we can now add that Gorka is an apologist for right wing terrorism. How else can you view his stunning claim on MNSBC that the only terrorism we see in our country is Islamic related: “There has never been — never been — a serious attack … or a serious plot that was unconnected from ISIS or Al Qaeda.”

That must come as news to the families mourning the loss of their loved ones caused by the terror attack of white supremacist Dylann Roof in 2015 who executed nine African Americans in the hopes of starting a race war.  But we don’t need to go back to 2015 to see the alarming rise of right wing terrorism in our country that Gorka refuses to recognize.

In March, white supremacist terrorist James Jackson traveled to New York City from Baltimore for the sole purpose of killing African Americans. Jackson did kill one African American man before being arrested and was later formally charged with terrorism by the Manhattan District Attorney.

In May, a man who on social media had spewed white supremacist views, killed two brave Americans on a train in Portland after they stood up to his harassing of a young Muslim American woman wearing a hijab. There were also the right-wing terrorists who called themselves “The Crusaders” arrested in October in Kansas for plotting to kill Muslims there.

In December, Glendon Scott Crawford – another right-wing terrorist – was sentenced to 30 years in prison for his terrorist plot to build a radioactive weapon to kill American Muslims. And just two months ago yet another right-wing terrorist, Robert Doggart was sentenced to nearly 20 years in federal prison for his plot to attack American Muslims in Islamberg, New York. The list goes on and on of the threat from right wing actors.

But while Gorka and Trump demand we use the words “radical Islamic terrorism” neither will dare utter the phrase “right wing terrorism.” (And you can forget them ever saying “white supremacist terrorism.) Ironically Gorka stated while on MSNBC Tuesday that, “if you misdiagnose anything, whether it’s a serious disease or an international geopolitical threat, you will never solve it.” He added, “It’s about people who have an ideology that is evil and has to be destroyed.”

But Gorka refuses to follow his own words when it come to the evil ideology of right wing terrorism. Instead he serves an apologist for it as he did on MNSBC Tuesday when asked about the bombing of an Islamic center in Minnesota that the governor there called an “act of terrorism.”  Stunningly Gorka –without offering a shred of evidence – stated that this act of terrorism “may have been committed by left wing actors.”

Gorka continued, “There’s a great rule: All initial reports are false.” Gorka then added, “We’ve had a series of crimes committed — alleged hate crimes by right-wing individuals in the last six months — that turned out to actually have been propagated by the left.”

Have there been some hoaxes? Yes. But that is a tiny fraction of the hate crimes we have seen against Jews, Muslims and other minorities in Trump’s America.  But regardless of who carried out this bombing, why won’t Gorka and Trump at least make a statement that Trump stands shoulder to shoulder with the Muslim American community?

Simple, because Trump standing up for Muslim Americans is one of the few things that could actually hurt him with is base. And Trump knows it. Trump won the White House trafficking in hate against various groups with Muslims being so often the target of his bigotry.

The reality is that with Trump’s approval falling below some STD’s, we can expect to see Trump, Gorka and his team continue to ignore right wing terrorism as well as refuse to denounce attacks against American Muslims. Trump simply can’t afford to lose any more support.