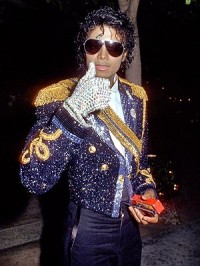 Maybe you’ve heard: Michael Jackson‘s funeral is today. The masses are reportedly descending on Los Angeles as we speak. In TV land the cablers are planning on going wall-to-wall with coverage (if you are a politician with something to get off your chest this afternoon is probably a good time to come clean!). Even the networks will be going live with the memorial service to be held at the Staple Center this afternoon. But does it matter?

You may recall that death of Michael Jackson on June 25 almost broke the Internet. So great was the rush of people eager to get the news of Jackson’s death out that Twitter — where Jackson clocked in at 15% of the tweets for that day — almost came down. YouTube saw enormous views on MJ vids, and websites who managed to jump on the bandwagon saw record traffic. All begging the question: Is television even necessary?

One can only imagine that the digital cacophony emanating from Staples Center this afternoon from the eight thousand plus people lucky(!) enough to get tickets will provide a sort of deafening coverage the cablers can only dream of (with the possible exception of CNN who has managed to rise from the ratings dead on the back of Jackson post-mortem chatter). Add to that the fact Facebook and Hulu are both live-streaming the event, and then take into account to commentary that will be generated online about all the other commentary and basically what you have is a lot of sound and fury signifying…we’re not sure, but whatever it is, assuming the Internet can handle Michael Jackson’s afterlife, it can’t bode well for television in the long run.