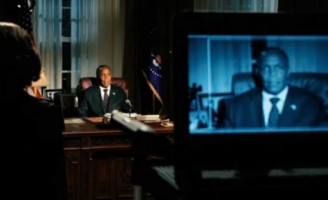 During the 2008 Presidential campaign, The Onion satirically asked “Do We Really Want Another Black President After The Events Of Deep Impact?” Now that the electorate has answered that question in the affirmative, you would think that fictional black Presidents would see some sort of progress in the area of the world not ending. While there may not be a deeper meaning to 2012’s political trappings, it certainly is an interesting coincidence.

In 1998’s Deep Impact, Morgan Freeman’s President Tom Beck (Beck? Are you kidding me?) eases the world into the idea of total annihilation, by giant comet, with the help of in-the-tank MSNBC reporter Tea Leoni. The world doesn’t quite end, but a little piece of the comet does break off and wipes out the entire eastern seaboard with a tidal wave that Elijah Wood outruns on a dirtbike.

Flash forward 11 years, and you have 2012’s Danny Glover portraying President Tom Wilson leading the free world into that good night, as solar activity disrupts the Earth’s core. The dirtbike won’t save you this time:

Granted, both characters come off well, and do everything they can to save the world. Glover’s portrayal of Wilson is probably 2012’s dramatic high point, particularly his palpable grief over his departed wife. Freeman, along with 24’s Dennis Haysbert, has sometimes been credited with helping Americans get used to the idea of a black President.

If there’s any conclusion to be drawn from this, it’s that there’s just too small a sample from which to draw any conclusions. In the vast array of fiction, where anything is possible, fictional black Presidents barely outnumber real ones.