Would Howard Kurtz Have Been Let Go If He Made Same Error With Tim Tebow? 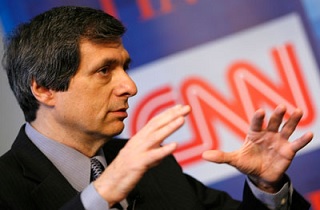 Freshly-former Daily Beast media reporter Howard Kurtz is spinning his separation from Newsweek/The Daily Beast as mutual, and while the split may have been inevitable, it was obviously hastened by Kurtz’s fatally flawed commentary on NBA player Jason Collins‘ coming out. The Week‘s Matt Lewis is offering a several-pronged defense of Howie, including the interesting (if predictable) notion that Kurtz might well have survived this episode had his target not been a “sacred cow,” as Breitbart’s John Nolte put it:

Kurtz’s sin was making this error with a sacred cow. Had he made EXACT same error with a Palin or Bachmann, media & Beast woulda shrugged.

Nolte’s example is flawed in several ways, first, because it presumes that ideology would make the difference (the premise holds up just as well with, say, Dennis Rodman), and he’s comparing Collins with two figures who are deeply unpopular outside of their core fans. A better example, in my view, would be Tim Tebow, a popular figure who rests on the other side of the cultural divide from Collins.

My first thought, upon reading this, was that Kurtz’s sin wasn’t in making the error, but in failing to recognize that it was a fatal error. Instead of simply retracting the column, he tried to salvage it by changing the wording slightly. Instead of “hiding” the fact that he was once engaged to a woman, Kurtz amended the story to say that Collins “downplayed” the engagement, and “didn’t dwell on it.”

It’s also entirely possible that his separation from The Daily Beast was the result of a failure to agree on a remedy; that Kurtz felt his updated column was defensible, and refused to agree to a retraction.

Even given all of that, though, it’s tough to dismiss Lewis’ and Nolte’s question out of hand. I usually have little patience for this sort of whiny, counter-factual critique, and there’s no way to know for sure, but another recent story lends possible credence to it. A few months ago, Washington Post columnist Suzi Parker reported that Sarah Palin had signed on as a paid contributor to Al Jazeera America, based on a story that turned out to be satirical.

Her original column built on that story to paint Palin as a desperate fame whore, and once the satirical nature of the source article was revealed, Parker simply re-worked the column to omit the Al Jazeera reference entirely, but with the same premise. The paper included a correction at the top of the article, but there was no apology from Parker, and no deviation from the themes of the original piece.

Now, the Palin comparison is imperfect on several levels, but it does reveal markedly different outcomes in somewhat similar circumstances. Even more fascinating, though, is the fact that the “She The People” blog that Parker wrote the piece for is run by Melinda Henneberger (Matt Lewis and I both worked for Melinda at Politics Daily before it became HuffPost Politics), who is apparently fine with this attack on Palin, but not with a defense of Palin (and other conservative women) from misogynistic attacks.

One area in which I wholly agree with Matt is that Kurtz has not earned the dogpile he now finds himself at the bottom of:

The thing I really don’t get is why so many reporters and journalists on Twitter were gleeful at Kurtz’s error. Now I know it’s hard to criticize people for criticizing someone like Kurtz who is himself a media critic. He’s a ripe target. Still, Kurtz sort of had to do media criticism. Up until a few hours ago, it was his job. You may not like it if he goes on TV and talks about you, or writes a column about you, but that’s a lot better than having hundreds of your colleagues mock you on Twitter. I’d much rather have someone write a blog post or column debunking one of my ideas than have them troll me and bully me on Twitter. And we journalists are not doing wonders for our reputation by piling on the schadenfreude in the wake of Kurtz’s dismissal.

If anyone should be sympathetic to his plight, it should be journalists who will make errors of their own someday, too.

Lewis also offers a “speed kills” defense of Kurtz, noting that “This is a competitive business. Mistakes are inevitable, and it seems to me that new media outlets might regret sending a message that says honest mistakes — which are made because someone was too fast or aggressive — are career enders.”

There’s no reason this episode should be a career-ender for Kurtz, but this does rise above the level of an honest mistake. In my view, his attempt to salvage the column was probably out of a writer’s misguided loyalty to his own words, or perhaps a stubborn inability to let go of an enticingly contrarian premise, but to the outside observer, it could easily read as malice toward Collins. For now, Howard still has his Reliable Sources gig on CNN, and he ought to use it to apologize to Jason Collins this weekend.