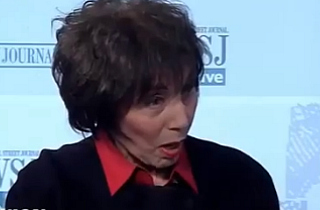 If the last week has made anything clear about the Wall Street Journal editorial board, it’s that they sure do not like Sen. Rand Paul (R-KY) and his libertarian-leaning views on civil liberties.

Last Monday, the paper ran an editorial column lashing Sen. Paul and other libertarian-ish legislators “who keep insisting that the U.S. homeland is not part of the terror battlefield” in the wake of the Boston bombings. The editorial board asserted that Paul, several GOP colleagues, and “anti-antiterror types on the left” were “making the U.S. more vulnerable” by defending the bombing suspects’ right to due process and to be tried as a citizen of the United States.

And then this Saturday, Journal editorial writer Dorothy Rabinowitz took to the paper’s web show to offer up what can only be described as a trashing of the Kentucky senator.

Discussing the recent question du jour of whether Paul contradicted himself by suggesting in the wake of the Boston attacks that he’d be fine with police using domestic drones to defuse active shooter situations, Rabinowitz opted for a wholly cynical analysis over a simple “yes” or “no“:

“What he’s for is himself and his changes in the presidential sweepstake. But if you roll back the tape to that filibuster, that extraordinary performance where he is Mr. Smith goes to Washington — [in a mock Southern drawl] ‘I’m just a po’ boy chewin’ ma Snickers bar here’ — and remember that he draped himself in the Constitution and he kept presenting this utterly false picture of people being cut down by their swimming pools by American drones. Can this happen? None of this could conceivably ever happen. But it’s that slippery slope that people like Rand Paul and their liberationist, anti-government frenzy like to paint.”

So, she believes, he “changed his position” after Boston because “he realized” he’d better be on the side of “protection and surveillance.”

The host then changed the subject to fire off a loaded question about whether Sen. Paul and others who believe in “this theory of libertarianism” that “we have to give [domestic terrorists] every protection” are engaging in a “dangerous point of view.”

Surprise! Rabinowitz agreed. Not only is the view that the younger Tsarnaev brother shouldn’t be tried as an enemy combatant “dangerous,” it is also “loathsome,” she said. Loathsome because “it represents the streak of libertarianism that Rand Paul represents” — one that she fears will “push him into contention.”

The two then engaged in a little banter about how Rand Paul’s immigration policy puts him at odds with libertarianism, willfully (and disdainfully) neglecting the fact that Rand Paul himself has shrugged the “libertarian” label. It really shouldn’t surprise anyone that the senator is more of what we’d call a “conservatarian,” given his socially conservative views on multiple issues, and the fact that, indeed, he is not for a much less restrictive immigration system like most libertarians are.

But, putting facts aside, this becomes a little bit of a punching-bag situation for the two WSJ talkers. Because Rand Paul doesn’t conform 100-percent to what they believe is “libertarianism,” he is an “opportunist” and a “hypocrite” — not just, you know, a politician who never once professed to be purely libertarian.

It is well-known that Paul borrows from mainstream Republican thought on multiple issues, occasionally disappointing those “dorm-room libertarians” whom the WSJ seems to view with such contempt.

Rabinowitz’s ultimate point is one that is shared by her like-minded cohorts Charles Krauthammer, Bill Kristol, and others who’ve been equally dismissive and scornful of Paul’s heretical views on civil liberties: Paul’s views represent a threat to the Republican Party because they force the establishment to confront itself on whether they are truly the party of small, restrained government — even when it comes to issues of war and peace.

They clearly don’t like that introspection and would prefer it go away… as soon as humanly possible.

On Sunday afternoon, Paul replied to last week’s WSJ editorial with an op-ed of his own, writing in part:

The Journal wants those of us who believe in the Bill of Rights to shut up about civil liberties in the wake of the Boston bombings. Like children in the schoolyard you chant: “See, look at these bombers, they don’t deserve trials or lawyers!”

But the Journal wants to gloat about a case where the evidence has already been paraded across every television in America. Most of us have seen enough of the tragedy in Boston that I doubt anyone can conceive that a jury will find Dzhokhar Tsarnaev innocent in a court of law.

[…] Because some terrorists will battle us here at home doesn’t mean we want the laws of war or martial law at home. The Bill of Rights still needs to reign supreme. Our soldiers have sacrificed life and limb for our Constitution—it seems the least we can do is defend them in the homeland.

Despite this measured response, one can only expect the neoconservative faction of the GOP will continue to ramp up the inflammatory rhetoric in their pursuit of squashing this sort of thought within their beloved party.