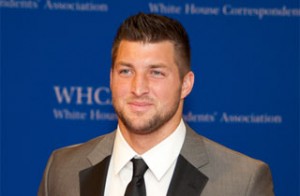 The New York Mets — apparently intrigued by Tim Tebow‘s potential to hit with power from the left side of the plate — have signed the former NFL quarterback to a minor league contract.

As first reported by ESPN’s Adam Schefter, Tebow impressed Mets brass enough at his Aug. 30 workout in LA to convince them to extend the offer.

The Mets tweeted out confirmation of Schefter’s report, complete with an American Idol-style glamour shot for good measure:

We have signed OF @TimTebow to a minor league contract. He will participate in the #Mets Instructional League. pic.twitter.com/I6gmW0b6hY

John Coppalella, the general manager of the Atlanta Braves, told MLB.com Tuesday  that there really wasn’t any downside for his team — or any other — in signing the Heisman Trophy winner.

“There’s no risk,” Coppolella said. “If it doesn’t work, we’ll be honest with Tim early, and we can move on. If it does work, it’s great for the Braves and it’s great for baseball.”

The Braves were considered to be front-runners for Tebow, given Coppolella’s comments as well as the fact that they had multiple representatives attend Tebow’s Aug. 30 showcase.

But the Mets acted quickly and inked Tebow before the Braves or anyone else could. And he will now play organized baseball for the first time since his junior year of high school — when he was an all-state selection in Florida.

Tebow will report to the Mets instructional league in Port St. Lucie, Fla. on Sept. 18.