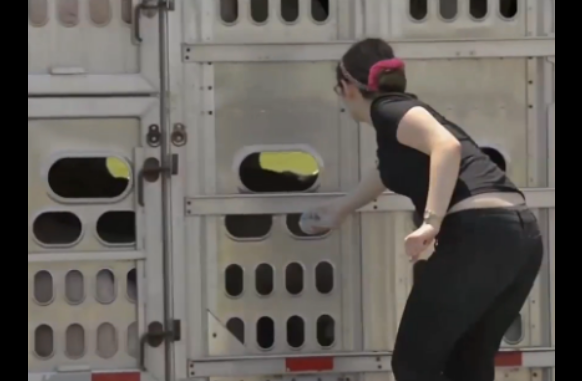 Anita Krajnc is facing a decade behind bars in Canada after being caught giving water to captured pigs that were being sent to a slaughterhouse. Krajnc — the co-founder of a group called Toronto Pig Save — came across caged pigs this summer and was captured on video tape giving water to several of the animals. Under Canadian law, animals such as the pigs Kranjnc gave water to are treated as property and can be shipped for up to a day-and-a-half without water, food, or rest.

Krajnc has become a hero on the humanitarian front; her public Facebook page has become a symbol of the #StandWithAnita movement: 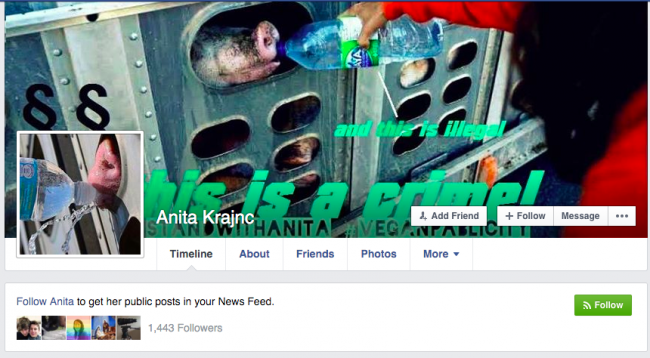 In Ontario on Monday a Canadian judge is expected to set the trial date for Krajnc, who faces upwards of $4,000 USD in fines or even ten years behind bars. According to The Telegraph, Krajnc and the group she represents, “…stands by the roadside [and waits] for passing pig trucks, and then pokes water and fruit through the slats in the trailer. However, those involved in the pig transportation industry say the group’s activities risk endangering the pigs and can also pose a road safety hazard.”

The namesake of the Van Boekel Hog Farms — Eric von Boekel — said in a statement, “[Krajnc] has the right to protest and make her views known. What she does not have the right to do is put my livestock in jeopardy. It is happening at a traffic stop light and people are putting their arms in with the livestock.”