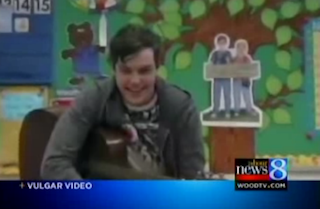 I guess it’s Things Not To Do In Front of Children Day here at Mediaite. This story, however, is even stranger. 21-year-old Evan Emory of Michigan has been sentenced to two months jail time after filming and posting a video featuring him singing a sexually explicit song to elementary school students. The only thing is, Emory never did that. He actually sang an appropriate (and apparently well-received) song to the kids and edited in the other song (which the kids never heard) later for a comedy video.

Hyper Vocal has the details:

“The footage of the children was recorded in January when Emory performed a clean song for the class. It was only later that Emory returned to the empty classroom to record a vulgar song, which he edited with clips of the children and posted to YouTube in mid-February.

On Tuesday, Judge William C. Marietti of the Muskegon County 14th Circuit Court sentenced Emory under a previously arranged plea deal to 60 days in jail, two years probation, 200 hours of community service, mandatory counseling and fines and costs. And when he emerges from jail, Emory can’t be within 500 feet of children under the age of 17. All for a comedy attempt gone awry.”

While in court, Emory’s attorney, Terry Nolan, called the sentence “fitting.” Is it? It’s certainly more fitting than the original charge of child pornography which would have landed Emory in prison for up to 20 years and gotten his name on the sex offender registry. But, is any sentence kind of like sending Anthony Perkins to jail for killing Janet Leigh in the shower? Neither are something that actually happened.

Like the schoolteacher in the earlier story, Emory messed up big time. Using deceptive editing tricks to make it appear like kids are witness to things they actually aren’t (dubbing in different dialogue, trick camera angles) is something movies and TV shows do every single day. However, in Hollywood, the parents are well aware of both the dummy content and the final product. Emory has stated that he understands this. But is this moronic blunder worthy of jail time?

Both of these stories show the absolute heap of trouble a person can get into when they do something to a child that the parent doesn’t like. In the footage from the court room below, you can see a father screaming at Emory, saying he deserves a harsher sentence, telling him to get psychiatric help, and basically doing everything short of accusing the guy of molesting his kid. While I certainly would want to punch some smart ass college kid in the face for pretending that he sang about anal sex in front of my child, I don’t know if I’d want the guy in prison. As much as these parents talk about their kids being scarred for life (how, I’m not sure), something tells me they’ll get over the experience much quicker than Emory will get over being charged with producing child pornography. Isn’t that more than enough punishment?

Like race, sex is a tricky, tricky subject in this country. And people are incredibly protective of their children (as they should be). Emory set out to make a comedy video. He ended up making a cautionary tale.

Watch a WWMT news report on the sentencing below. The YouTube video has been taken offline, but you can see some of it in the news story embedded here.