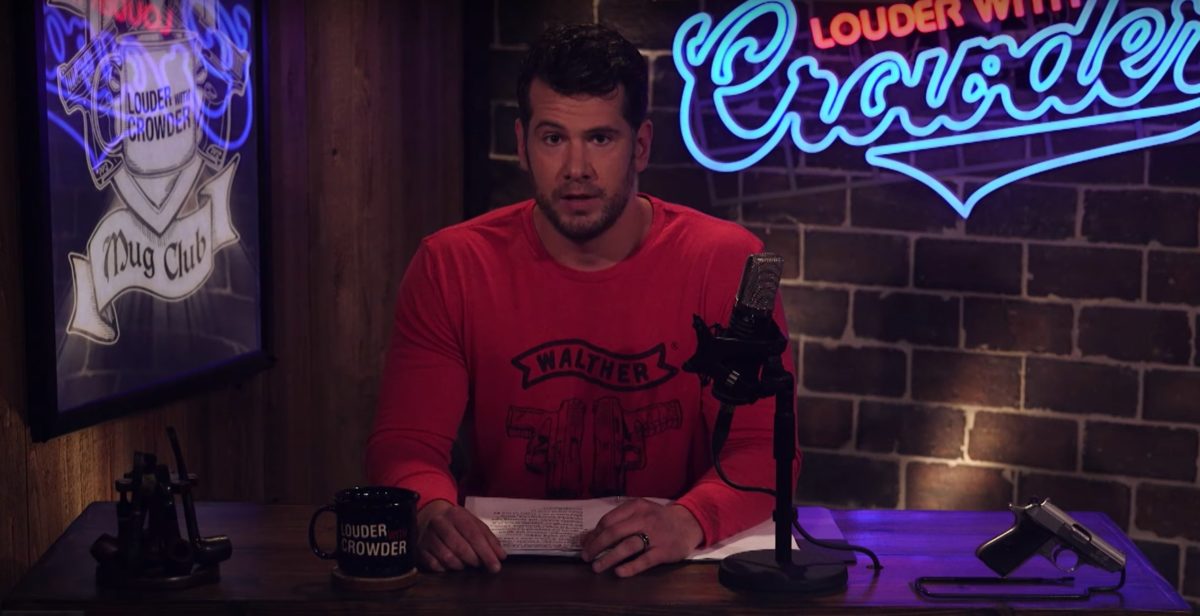 Update on our continued review–we have suspended this channel’s monetization. We came to this decision because a pattern of egregious actions has harmed the broader community and is against our YouTube Partner Program policies. More here: https://t.co/VmOce5nbGy

YouTube linked to an updated guideline blog, saying it will now “outline additional steps we may take beyond our current strike systems when channels upload videos that result in widespread harm,” including potentially suspending the ability for creators to make revenue from their channels (otherwise known as demonetization).

Just spoke with YouTube. Confirmed, the second Adpocalypse IS here and they’re coming for you. More details to follow. Stay tuned.

So the fuck what. Basically all political content gets “demonetized.”

Crowder’s revenue stream isn’t from YouTube ads. It’s from selling merch and “Socialism Is For Fags” shirts to millions of loyal customers, that @YouTube continues to drive to his channel. For free. https://t.co/ws8mqvRoKU

Abusers use it as proof they’re being “discriminated” against. Then they make millions off of selling merch, doing speaking gigs, and getting their followers to support them on Patreon.

The ad revenue isn’t the problem. It’s the platform.

YouTube issued a clarification later Wednesday, saying it would restore revenue to Crowder’s channel if he removed links to sell his t-shirts.

To clarify, in order to reinstate monetization on this channel, he will need to remove the link to his T-shirts.

UPDATE: In another update, YouTube issued a further clarification and said the t-shirts were one of the issues that led to Crowder’s demonetization, but not the company’s only issue with his channel. YouTube confirmed Crowder’s channel has been demonetized.

Sorry for the confusion, we were responding to your tweets about the T-shirts. Again, this channel is demonetized due to continued egregious actions that have harmed the broader community. To be reinstated, he will need to address all of the issues with his channel.

YouTube had originally said it would not punish Crowder following a review of his channel.

(2/4) Our teams spent the last few days conducting an in-depth review of the videos flagged to us, and while we found language that was clearly hurtful, the videos as posted don’t violate our policies. We’ve included more info below to explain this decision:

YouTube tweeted Tuesday that it had conducted a review of Crowder’s content and “while we found language that was clearly hurtful, the videos as posted don’t violate our policies.”

(4/4) Even if a video remains on our site, it doesn’t mean we endorse/support that viewpoint.

There are other aspects of the channel that we’re still evaluating– we’ll be in touch with any further updates.

Last week, Maza tweeted out a supercut of various insults Crowder has used against him in his videos, many consisting of insulting Maza’s sexual orientation–resulting in YouTube launching its review.

Since I started working at Vox, Steven Crowder has been making video after video “debunking” Strikethrough. Every single video has included repeated, overt attacks on my sexual orientation and ethnicity. Here’s a sample: pic.twitter.com/UReCcQ2Elj

On Monday, Crowder responded by posting an “apology” video that made light of the criticisms and mainly consisted of him re-reading previous insults from his previous videos.

Crowder has defended his comments on his channel by saying the insults are “friendly ribbing” and he makes comedy videos.

But Maza has claimed that Crowder’s videos mentioning him have resulted in harassment and abuse from Crowder’s fans and followers.

To be crystal clear: @YouTube has decided that targeted racist and homophobic harassment does not violate its policies against hate speech or harassment.

Maza posted a thread Tuesday responding to YouTube, arguing the company “gives bigots free license” and telling LGBT YouTube creators that the company is “using you.”