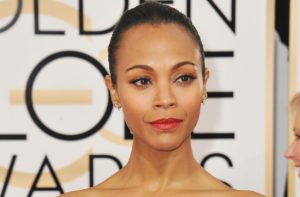 Actress Zoe Saldana, famous for her roles in hit films like Star Trek and Guardians of the Galaxy, has become the latest in Hollywood to offer a somewhat different take on Donald Trump.

It’s pretty clear that most of Hollywood was anti-Trump––hence all those recent star-studded videos––and as far as many Trump supporters are concerned, Hollywood is too elitist and out-of-touch anyway.

But on the heels of comments Nicole Kidman made about people needing to support Trump, Saldana spoke to the AFP reflecting on how most of Hollywood reacted to Trump and his popularity with many others across America:

“We got cocky and became arrogant and we also became bullies,” the 38-year-old actress said of Trump, who has been frequently berated himself for bullying tactics, including seemingly mocking a reporter with disabilities.

“We were trying to single out a man for all these things he was doing wrong… and that created empathy in a big group of people in America that felt bad for him and that are believing in his promises.”

Last year during the campaign, a lot of actors and crew members involved in the Star Trek franchise, Saldana included, co-signed an open letter that read, in part, “We cannot turn our backs on what is happening in the upcoming election. Never has there been a presidential candidate who stands in such complete opposition to the ideals of the Star Trek universe as Donald Trump. His election would take this country backward, perhaps disastrously.”

Saldana now says she’s reflecting on Trump’s win with “a lot of humility” and she hopes that Americans will continue to “stand by equal rights and treat everyone with respect.”