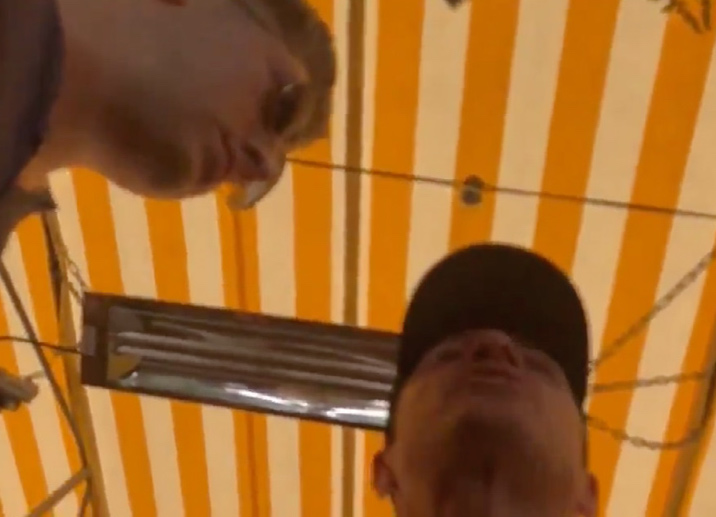 According to Urban Dictionary, half-stepping is defined as “starting something with no intention of finishing,” and “talking like you are going to get violent with someone and not follow through.”

Devotees of early hip-hop will recognize the phrase, and why it comes to mind after a video of some dude verbally attacking CNN’s Chris Cuomo at a Shelter Island bar went viral Tuesday morning. The surreptitiously captured video shows both the hecklers and Cuomo puffing chests and offering unfulfilled threats, without ever “throwing joints” — the very definition of half-stepping.

While Cuomo deserves credit for showing restraint and not taking the bait from these particular adversaries — and taking ownership of his role in the beef — perhaps more surprising is the restraint so far shown by cable news outlets in ignoring a story that has been front and center on all Twitter feeds.

Impossibly, Cuomo can claim to being both the son of and brother to the Governor of New York state. As a result, critics have cast his job as CNN primetime host as the result of a privileged upbringing: It’s a perfect storm for those who overlook the quality of his nightly show and instead focus on an unfair caricature.

Which, has made him something of a predictable and recurring foil on Fox News opinion programming.

Regardless, the rival network, along with other cable news morning shows, entirely ignored the viral video of Cuomo throwing down. And as of the publishing of this post, the terms “Chris Cuomo” and “Fredo” have not been mentioned once on cable news. Shocker!

In many ways, this story is the perfect intersection of media and politics…the very thin line that separates two sides of the great culture war that so often gets mined for cable news programming, especially on the opinion-based morning shows.

It’s clear why CNN would ignore — though one could easily imagine that New Day (a show that Cuomo hosted until last year) might run to defend their former host (not that he needs it). New Day producers seem to understand that discretion is the better part of valor, so why borrow trouble by amplifying a story for which Cuomo apologized?

More notably, both Morning Joe and Fox & Friends completely ignored the story. Could that be due to the fact that it broke late Monday night and details and statements were still emerging? Unlikely — late-night stories are almost always covered the next morning, caution be damned.

For all the animus he receives from the far right, Cuomo is well-liked and respected within the industry. He may have a reputation for thin skin, but commands respect from his fellow cable newsers — as evidenced by Hannity defending his 9 p.m. rival on Twitter. That could explain why this story has so far been ignored.

The far more likely reason for the restraint shown by the competition is that, even with ideological foes, there is something of a familial bond among on-air television talent. And covering a secretly captured video by fairly obvious political trolls gives unneeded oxygen to those eager to confront public figures in public armed with only a smartphone and an insult.

To give attention to this story on broadcast and cable networks is to tacitly approve such ambushing tactics and makes every single on-air talent a potential target. And yes, cable news talent gets paid well for their jobs, but they are no less deserving of private time with their families.

So kudos cable news industry — you have thus far gone above a pretty low bar of expectations. There still is plenty of time left in the day for someone to cross the line (looking at you Jessie Watters and Greg Gutfeld), but let’s hope that this one gets a pass.