By Trying to Have it Both Ways on Trump, Mitt Romney Has Disgraced Himself
Opinion

By Trying to Have it Both Ways on Trump, Mitt Romney Has Disgraced Himself Forever 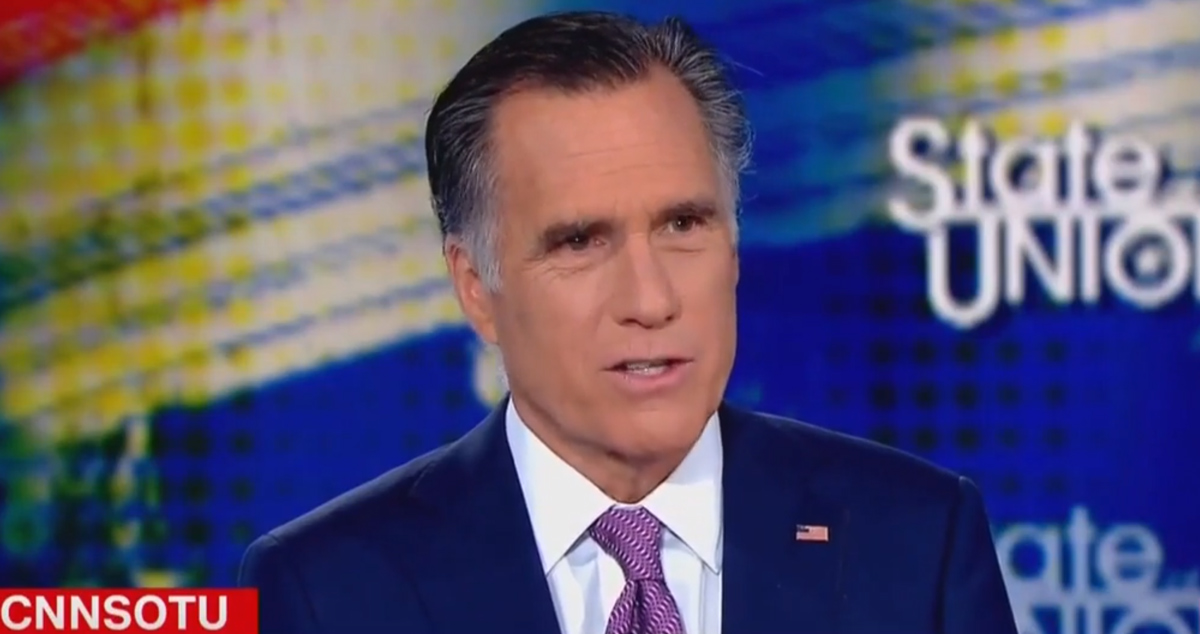 The flipping of this age-old question was one of the first things that came to mind when Senator Mitt Romney (R-UT) was asked on CNN to respond to Republican Rep. Justin Amash declaring that the Muller report proves that Trump has committed impeachable offenses. Romney, who was once Trump’s harshest critics, cashed in that status to become effectively Trump’s best friend.

Romney did this by single-handedly taking the momentum created by Amash’s bold stand and transforming it into a dead-cat-bounce for the impeachment movement on the right. In doing so, he disgraced himself forever and ended any legitimate chance that Trump will be removed from office based on the current factual record, at least in his first term.

Thanks to extreme partisanship, we live in such a divided time that there is this overwhelming presumption that no political criticism means anything at all, unless it comes from someone of your own party. Since Romney was the only Republican to rip Trump after the Mueller report came out, and because he is seen as protected by his personal wealth and newly elected status from the very safe state of Utah, he was by far the most likely person within the GOP to willingly voice his agreement with what Amash had said, especially since he has famously warned of the dangers of Russia in the past.

Instead, Romney gave Jake Tapper of CNN a convoluted answer which appeared to have the primary goal of not upsetting anyone. He praised Amash for his courage, but disagreed with him about whether Trump had been proven to have done anything impeachable, mostly because it was impossible to verify that Trump had ill intent in his efforts to obstruct the investigation.

Because of Romney’s status as the only prominent Republican willing to occasionally criticize the GOP’s Conman-God-King, having him push back on Amash was far more effective than if it had been done only by Trump’s normal crew of cult-member sycophants. Whether Romney realized or intended this to be the case, he did Trump a huge favor because now no one else will dare to back Amash, and every Republican will feel free to open fire on the congressman, especially after Trump himself, in a tweet befitting a third-grader who missed their nap, did so, rather embarrassingly, the same day.

What made Romney’s statement so particularly pathetic is that it was not remotely accurate. Even worse, it is a good bet that he knows darn well that he did not tell the truth.

The concept that Trump had no ill intent in his obstruction of the Russia investigation, presumably because there was no proven underlying crime, is utterly laughable. This is clearly an example of Romney having decided he doesn’t want to be forced to favor Trump’s impeachment and removal and has simply gone on a desperate search for a contrived rationalization to justify that self-serving position.

For instance, let’s take the firing of then FBI Director James Comey, one of the primary obstruction allegations against Trump. Previously it may have been possible, though naïve, to not link that act, which in isolation may be seen as Trump simply using his normal presidential powers, with Trump having told Comey, privately, to take it easy on former National Security Adviser Michael Flynn.

Now that we know, however, that multiple Trump supporters attempted to get Flynn to not cooperate with Muller’s probe, giving Trump that benefit of the doubt here is ludicrous. It is now very obvious that the firing of Comey was part of Trump’s plan to keep Flynn from giving up whatever it is that he knew about what really happened between his campaign and Russia, and that, therefore, there was indeed ill intent.

Similarly, I believe that there is another episode of obstruction that Mueller could not have known about because Attorney General Bill Barr had not yet exposed himself as Trump’s PR hack. In light of what an abomination Barr has turned out to be with regard to the Mueller report, it is only now quite clear that Trump’s firing of Barr’s predecessor Jeff Sessions, who had recused himself from the Russia investigation, was an act fully intended to obstruct that probe by replacing him with someone who would effectively kill it for him.

In my view, Romney’s surprising cowardice comes in part because of the death of John McCain. Had McCain still been alive, he would have provided Romney the political cover needed to stand up for what he knows is right. But with McCain long buried, apparently along with the testicles of his good friend Lindsey Graham who has since turned into the very worst of the Trump lackeys, Romney has no one to stand next to him in this battle, and he has subsequently surrendered, without even having the honor to admit that is what he is doing.

I have always liked Mitt Romney. I believe him to be a good man. I wish he had been elected president in 2012. Recent history would have been much better for our nation if he had been.

However, particularly because of his disastrous decision to publicly kiss Trump’s ring during that lost presidential campaign, far more should be expected from him than what it appears he is willing to give. He owes America penance for that act which helped create this monster that now threatens the essence of what our nation is, but instead, he has selfishly chosen to help feed that same beast, all so the creature doesn’t try to eat him instead.

Since to whom much is given, much is expected, Romney in many ways, has failed his country worse than the mindless Trump cult members who don’t really care, or even know any better. Sadly, if history is just, it will not be kind to Mitt Romney.