Cenk Uygur Says If You Get A Tumor, Republicans ‘Want You To Die!’ 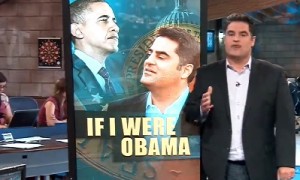 On Wednesday night’s edition of The Young Turks, host Cenk Uygur revived former Congressman Alan Grayson‘s “Die quickly” attack, only this time with a twist: he kinda has proof. In his If I Were Obama segment, Uygur makes the case for Democrats, and President Obama, to run on the Affordable Care Act, specifically the preexisting conditions clause and health insurance premium gender discrimination, in contrast to the Republican plan: “They want you to die!”

Cenk explains how polling on the Affordable Care Act (aka Obamacare) as a whole has been moving in the law’s favor, but isolates extremely popular provisions, like the preexisting conditions clause, that Democrats should run on. “You know how much of the country supports it? 85 percent,” Cenk says, adding “So I would say, if you want, go ahead and repeal the Affordable Care Act, but you know what will happen? If you have a pre-existing condition, you are screwed! And the Republican who repealed it is the guys who’s screwing you.”

He also suggests how the President can widen his lead over Mitt Romney among women voters. “In this Affordable Care Act,” Uygur says, “there’s a provision that says women and men have to pay the same amount–you can’t discriminate against women,” suggesting that the President “run an ad and say, ‘hey, if you’re a woman in America, do you think you should pay more than men for insurance? Well, if you do, great! Vote for a Republican.'”

“What they want to do is make women pay more than men for health insurance, Cenk added. “And they want to make sure if you ever have a pre-exisiting condition that you are totally and utterly screwed and on your own. In fact, David Dreier, a Republican candidate from California today said, ‘hey look, if you got a tumor, I don’t want to spend millions of dollars helping you.'”

“Okay, great! You got a tumor? What’s the Republican plan?” Cenk asked. “They want you to die. You want to run on that issue? Have at it hoss. Because if I were Obama, I wouldn’t be worried about them coming for me. I’d be coming for them.”

When Alan Grayson made his “Die quickly” pronouncement, there was a lot of conservative whining about “tone” or something, but this time around, Cenk can sort of prove what he’s saying. While he probably doesn’t think Republicans actually want people to die (that’s why I say there’s sort of proof), they’re not all that broken up about it. See if you can pick out what’s missing from Mitt Romney’s vision for health care, from an interview with Neil Cavuto following yesterday’s speech at the NAACP convention:

On Wednesday afternoon’s Your World with Neil Cavuto, host Neil Cavuto played an interview taped “moments later,” in which Romney reacted to the boos by saying “Well, I think we expected that, but I’m going to give the same message to the NAACP that I give across the country, that Obamacare is killing jobs.”

“And if jobs is the priority,” Gov. Romney continued, “we are going to have to replace Obamacare with something that actually holds down health care costs, as opposed to causing more spending for the government, and more spending for American families.”

Nothing in there about keeping people alive, much less healthy, because all health care is to Mitt Romney is a line on a balance sheet. When all you have is a hammer, everything looks like a nail.

As bad as Cenk’s picture of Republican health care looks, it’s actually much, much worse. Not only don’t they have a plan for preexisting conditions, even as Mitt Romney pretends he does, repealing Obamacare will actually leave you vulnerable for existing conditions, or conditions you might get in the future, and the GOP plan puts that vulnerability on steroids.

The Affordable Care Act contains important federal protections against insurance company practices like rescission. That’s when an insurance company finds out that you, who have paid your premiums for years, have suddenly gotten expensively sick (or pregnant), and go back to look at your initial application for insurance, to see if they can find any error at all. If they find one (and even if they don’t), they rescind your policy retroactively, and even try to recover whatever they paid on claims before you got sick.

Under Obamacare, insurance companies can only rescind your policy if they can prove you committed fraud, or made an intentional misrepresentation, and it’s up to the insurance company to prove intent. Additionally, such disputes are then covered by the appeals protections within the ACA.

Without the health care reform law, Americans are at the mercy of the insurance regulations in the states where they reside. That’s good news if you live in a state like California or New Jersey, which have tough anti-rescission regulations, but not so much if you don’t.

Under a Mitt Romney/any other Republican presidency, though, the state you live in will cease to matter, because they favor something they call “letting people buy insurance across state lines,” which means insurance companies can relocate to the state with the weakest regulations, and sell cheap, junk insurance to anyone who isn’t familiar with that state’s insurance regulations (meaning everyone). The result will be a competition among states to gut regulations, and states with strong regulations simply won’t attract a single insurer. Don’t take my word for it, here’s their last presidential nominee explaining it to me a few weeks ago.

To be completely honest, I don’t think Republicans want you to die, or just don’t care if you die, or just don’t notice, I think they just don’t understand that people can actually die because of this issue, it just doesn’t register within their bubble of experience. If it did, their policies would be inhuman, and I refuse to believe that about so many of my fellow men and women.