Moby’s Dick: Why Does Everyone Find it Funny that the Musician Rubbed His Penis on Trump?
Opinion

Moby’s Dick: Why Does Everyone Find it Funny that the Musician Rubbed His Penis on Trump?

The artist known as Moby appeared on Real Time with Bill Maher Friday night, and when he wasn’t curiously helping host Bill Maher “detox” from President Donald Trump using ASMR, he was sharing what he thought was a delightfully entertaining story about rubbing his flaccid penis on the man who would later become the commander in chief. Yes, you read that right.

Moby explained that the event, described in a new book he’s promoting, occurred nearly 20 years ago when a self-described “very drunk” Moby was out with friends and they called for a game of “knob touch.” That… activity, he unfortunately explained, is a game where you, well, touch one’s penis to an unsuspecting individual. In Moby’s case, that person was then-private citizen, Donald Trump.

As the story was told, both host and audience laughed hysterically at the absurdity of the situation described. That left only panelist Kara Swisher (founder of ReCode) appearing to be taken somewhat aback by the WTF-ness of what Moby just described.

For those missing the forest through the trees, Moby just admitted to rubbing his flaccid dick on an unsuspecting individual in a non-consensual way.

It doesn’t matter if a person is “blackout drunk” as Moby described himself (though being that inebriated likely wouldn’t allow for such untoward action), nor does it matter that the victim in this story is Donald Trump. It’s disgusting behavior no matter what, and the fact that Moby had the temerity to share this story on live television is perhaps the purest expression of white male privilege he could indulge, though obscured by in Moby’s vainglorious-progressive package.

Moby’s real name is Richard Melville Hall and he’s a great-great-great nephew of the Herman Melville, author of Moby Dick, from which “Moby” presumably gets his moniker. His Wikipedia entry describes him as an “American musician, singer, songwriter, producer, animal rights activist, and author.” It looks like he “fights the good fight” when it comes to progressive ideals, and yet he is not self-aware enough to realize that the sharing of the non-consensual rubbing story is an admission of, at best, really poor judgment and, at worst, serious, unacceptable, perhaps even criminal behavior.

That’s not hyperbole. If any other civilian was a victim to Moby’s unwanted penis rubbing, you can be damn sure that charges would be filed. And rightly so. But again, the shared story was from nearly two decades ago, and the more immediate issue is Moby’s judgment and the reaction to this story by Maher and his audience: they laughed! So funny, the dick-rubbing on an unsuspecting person.

Lest we lack more evidence of Moby’s unbelievable hypocrisy, we can look at a tweet of his from Thursday of last week, in which he criticizes Trump supporters for ignoring how Trump “bragged of sexual assault and getting away with it because he is a star…” 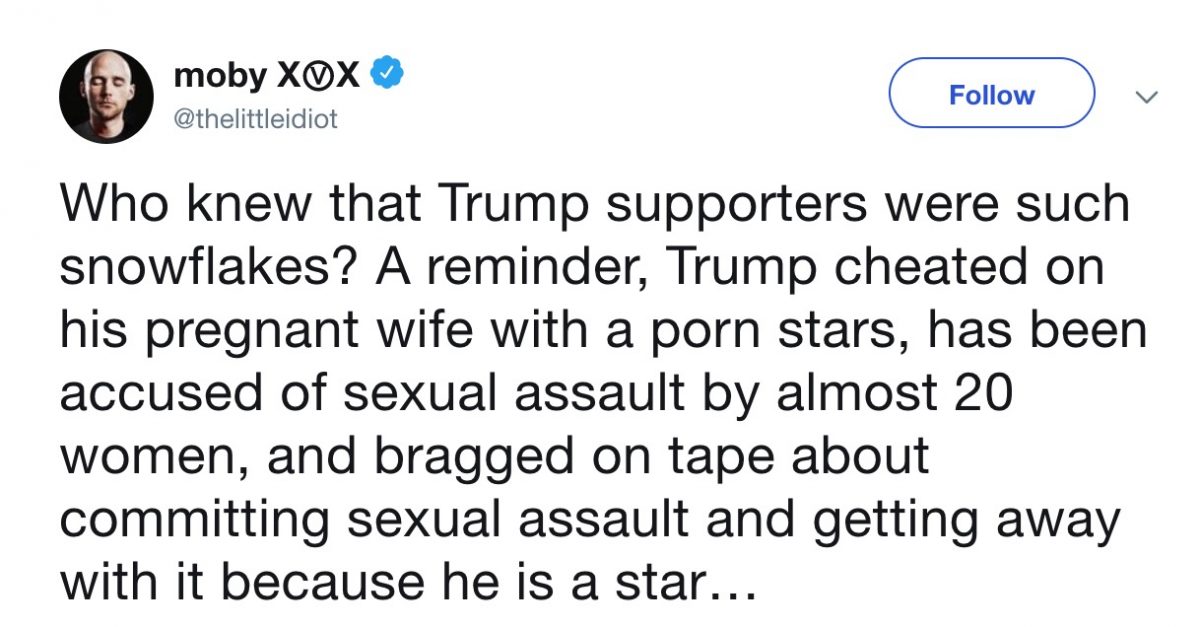 I will be first to admit that I loathe the phrase “limousine liberal” to refer to people like Moby whose rigid ethical standard is selective. But in this instance, Moby could not come off as more hypocritical: a vocal critic of Trump’s admitted sexual assault, only a day before he basically is doing the very same thing.

The only tiny benefit is that this story gives new meaning to the phrase “Moby’s dick.”

Watch above via HBO.