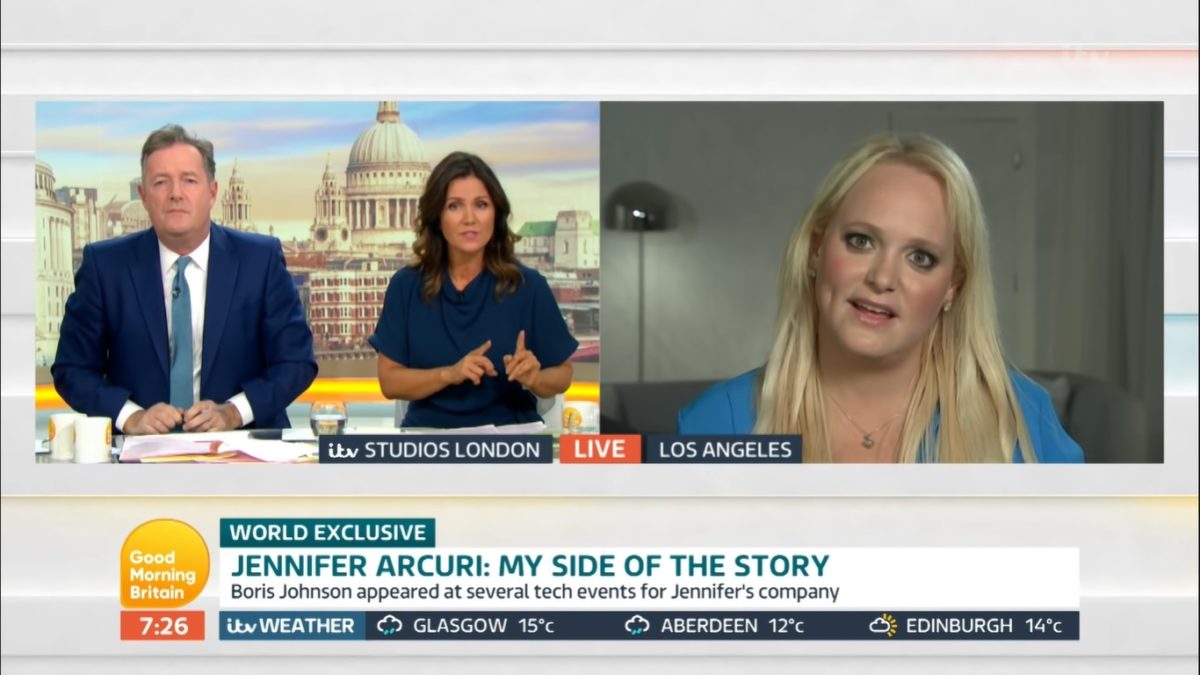 Tech entrepreneur Jennifer Arcuri, who allegedly had an affair with British Prime Minister Boris Johnson while he was the Mayor of London, dodged questions about her relationship with the PM nine times during an interview on Good Morning Britain, Monday.

The Washington Post, which was keeping track, reported that Arcuri “declined to answer – nine times – whether she had an affair with Boris Johnson while he served as mayor of London.”

“Did you feel it was normal behavior for the London Mayor, the married London Mayor to come to your home in Shoreditch on a regular basis, I mean, be honest. You think that was normal?” asked Good Morning Britain co-host Piers Morgan.

Emphasizing that her apartment was also her office, Arcuri replied, “You mean did I think it was normal that he came to my office like many other tech professionals, government officials did? No, I didn’t think it was awkward at all.”

“First of all, those people are not my friends. These are insinuations and third party hearsay, and no I wouldn’t be going around blabbing to a bunch of people at my school, that’s just completely preposterous. And secondly, would you like me to ask you about your sex life?” responded Arcuri. “Because I thought about this a lot, when the story broke, of course the first initial reaction is to deny everything and come out making sure your side… but then when I saw the way I’m objectified and dragged through the street, you know through the press, with all these kind of misquotes and misinterpretations of who I am. I can’t believe if I had looked a different way, or was a man, I wouldn’t be defined this way.”

Morgan’s co-host Susanna Reid then tried to get an answer from Arcuri.

“Of course questions about your private life, your personal life, and your sex life are extremely awkward and may appear extremely personal. The point about this situation is we’re talking about a relationship with a man who is in a position of enormous power and influence, and whether he should have declared an interest if he had a relationship with you. So it becomes much more of a matter of public interest, your own personal relationship with Boris Johnson, and it’s nothing to do with the way you look, or who you are, or objectifying you,” she proclaimed. “So we have to ask again, clearly there was chemistry, clearly there was connection. Boris Johnson is visiting your office, which is also where you live. Did that relationship develop into an intimate relationship?”

Arcuri dodged the question and declared, “I think we’re forgetting that Boris is extremely personable and it wasn’t like he singled me out. He is there to talk to anybody who is in his face enough and he was always a really good friend. And I think it’s quite unfortunate that… now I’m dragged into the middle of this horrific scandal, and the answer I’m going to give is now going to be weaponized against this man. It’s really categorically no one’s business what private life we had, or didn’t have. Categorically more important, Boris never ever gave me favoritism. Never once did I ask him for a favor, never once did he write a letter of recommendation for me.”

Desperate for an answer, Morgan asked again: “Did you have any intimate relationship with Boris Johnson? Yes or no?”

“Because the press have made me this objectified ex-model pole dancer, I really am not going to answer that question,” Arcuri shot back.

“So you won’t deny it?” questioned Morgan, prompting Arcuri to state, “I’m sorry. I’m not going to be putting myself in a position for you to weaponize my answer. I’m being used as a pawn.”

Morgan asked two more times, noting, “Just for the record, you’re not denying it?” but Arcuri held her position and concluded, “I’m not answering, that’s my record.”

Following the interview, Arcuri retweeted a Twitter post describing it as “one of the most sexist, condescending interviews I’ve seen in years.”

Sky News’ Kay Burley responded to the interview by posting, “Jennifer Arcuri is affronted and says she won’t answer allegations that she had an intimate relationship with @BorisJohnson. I wonder why she thought she was invited to appear on national television. To talk tech?”

Jennifer Arcuri is affronted and says she won’t answer allegations that she had an intimate relationship with @BorisJohnson.

I wonder why she thought she was invited to appear on national television.