From Hookers to High School: Five Craziest Moments from the Hope Hicks Hearing 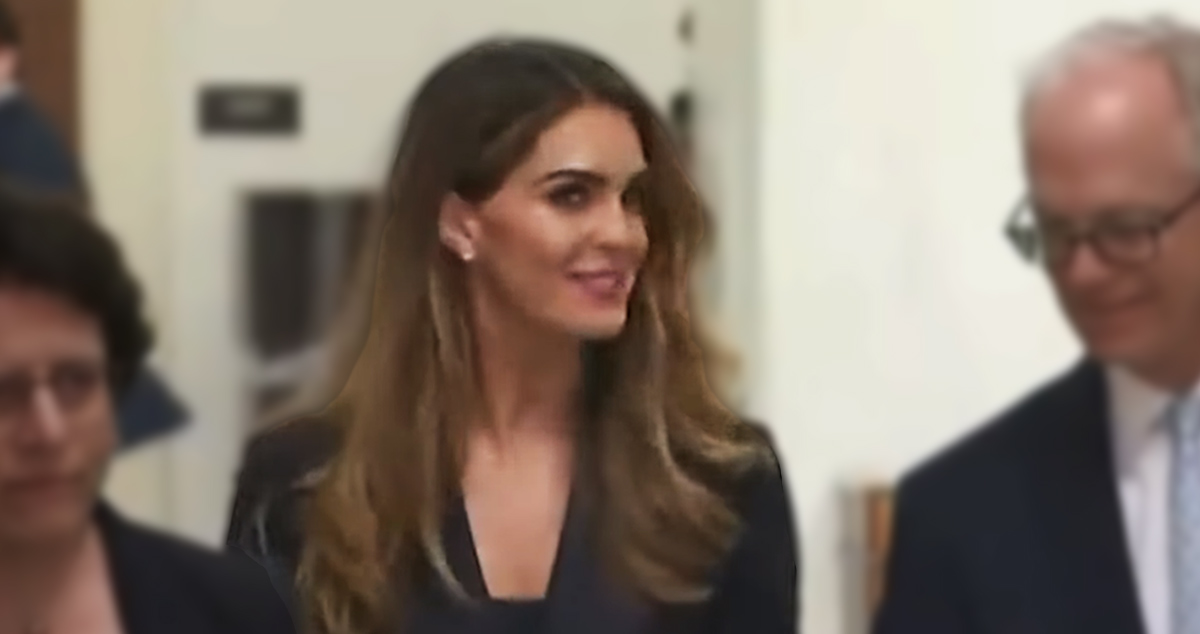 The transcript of the closed-door hearing with testimony from former White House Communications Director Hope Hicks was released on Thursday, and it was a long 192 pages with the word “objection” on almost all of them.

There is, of course, a lot to go through in the transcript, even despite the objections and Hicks’ controversial “absolute immunity” agreement. But some things bubbled right to the top as the craziest moments, and we have a few of those here.

Naturally, a top story from the hearing was the number of times her five lawyers objected based on the immunity. And Democrat Rep. Ted Lieu made a point of that by asking about mundane items.

Mr. Lieu. Most of my questions are going to be about your tenure during the campaign. However, I’m going to ask you a few questions at the beginning about your tenure at the White House to show how absurd the objections from the White House actually are. I apologize in advance for some of these questions, but absolute immunity is actually not a thing, it doesn’t exist. So I’m going to ask these questions for the purposes of the court proceeding that’s going to follow. On your first day of work at the White House, was it a sunny day or a cloudy day?
Mr. Purpura. You can answer.
Ms. Hicks. It was a cloudy day.
Mr. Lieu. And — yeah.
Ms. Hicks. That’s probably not helping my reputation, much by the way. I think people are going to laugh at this.
Mr. Lieu. And in the White House, where is your office located?
Ms. Hicks. Pardon?
Mr. Lieu. In the White House, where is your office located?
Mr. Philbin. We’ll object to that.
Mr. Lieu. Okay. During your tenure at the White House, where would you normally have lunch?
Mr. Purpura. You can answer.
Ms. Hicks. At my desk.
Mr. Lieu. Okay. And would the President ever come in while you’re having lunch?
Mr. Philbin. Objection.
Mr. Lieu. How often would you talk to the President on a given day?
Mr. Philbin. Objection.
Mr. Purpura. Objection.
Mr. Lieu. All right. I want to go to questions about your tenure during the campaign. According to news reports, on September 20th, 2016, Jared Kushner forwarded you an email, and this email was about WikiLeaks had contacted Donald Trump, Jr. with information about PutinTrump.org or a pro-Trump PAC. Why would Jared Kushner forward such an email to you?

Chairman Jerry Nadler also made a point of the immunity and objections, and rather than posting the transcript, here is a clip from MSNBC with host Rachel Maddow reading from that portion of the transcript.

Speaking of Nadler, he was the source of one of the most jaw-dropping moments of the hearing: when he called Hope Hicks “Ms. Lewandowski” repeatedly — three separate times — before she corrected him. Hicks, of course, was reported to have dated Corey Lewandowski, Trump’s very irritable former campaign manager, in 2016.

Hicks is young and, we’re not sure if you noticed, but a lot of politicians, well, aren’t. Which resulted in a pretty funny exchange about where Hicks was just a few years ago.

Mr. Cohen. And did you have that knowledge from discussions or overhearing discussions with Mr. Trump or other members of the campaign as the family?
Ms. Hicks. I had that knowledge as David Pecker provided the statement that they planned to provide to The Wall Street Journal to me just before it was given to the reporter as a heads-up.
Mr. Cohen. You never met either Ms. Daniels or Ms. McGuire — McDougal?
Ms. Hicks. No, sir. I was in high school in 2005.
Mr. Cohen. Time flies.
Mr. Collins. That hurts.
Mr. Cohen. Time flies, yeah.
Ms. Hicks. I had to get one in. You guys have been at me all day.
Mr. Cohen. Yeah. You’ll be happy to know Paul McCartney, who was in Wings, had his birthday recently, yeah. I think I’m going to let you do that. I’m going to go vote, otherwise Jon Stewart will say bad things about me. Thank you, Ms. Hicks.

Hope Hicks actually once looked into the possibility of the infamous phantom “pee tape,” though avoided calling it that during her testimony — after consulting with the team of lawyers of course.

Q Do you recall reaching out to Michael Cohen about the tape?
A My recollection of reaching out to Michael took place the following day. And it wasn’t about the tape; it was about — this is going to get confusing, but the day after the tape, there were rumors going around — I’m not sure exactly where — I heard it from our campaign spokesperson, Katrina Pierson, who was sort of like a — she had a lot of contacts, grassroots. And she had called to tell me that — or maybe sent me a message about rumors of a tape involving Mr. Trump in Moscow with, you know — can I say this?
[Discussion off the record.]
[cont]– with Russian hookers, participating in some lewd activities. And so, obviously, I didn’t — I felt this was exactly how it had been described to me, which was a rumor. Nonetheless, I wanted to make sure that I stayed on top of it before it developed any further, to try to contain it from spiraling out of control. And the person that made me aware of the rumor said that TMZ might be the person that has access to this tape. I knew Michael Cohen had a good relationship with Harvey Levin, who works at TMZ. So I reached out to Michael to ask if he had heard of anything like this; if Harvey contacted him, if he could be in touch with me.

5. Ted Lieu Gets Called Out for Tweeting

Dear Ted Lieu: you’re not supposed to live-tweet during a confidential hearing. The Twitter-obsessed Democratic congressman got called out for tweeting out portions of the Hicks hearing by a Republican colleague, Rep. Collins, on Thursday. We hope that at least provided a brief respite from the hell that is Lieu’s Twitter feed. Here’s that ridiculous exchange:

Mr. Collins. Could I just — I apologize, and I know we
talked about this before. And we’ll stop the clock, we’ll give
you a full hour. But it’s also been discussed in here that this
was — and the chairman made a great elaborate statement as we
started this about being confidential and keeping that through
the day.
But Mr. Lieu is live-tweeting this. So I mean, if he’s
willing to break his own chairman, I want it noted for the record
that the Member of the Democratic Party in this committee is
live-tweeting what his own chairman had asked him to keep
confidential.
Now, if this is the way we want to play it, we’ve now proven
that this is nothing but a political stunt. It is a press avail
opportunity. And if Mr. Lieu would like to go outside and testify
to the press, that’s fine. But simply doing this like it is, it’s
a mockery.