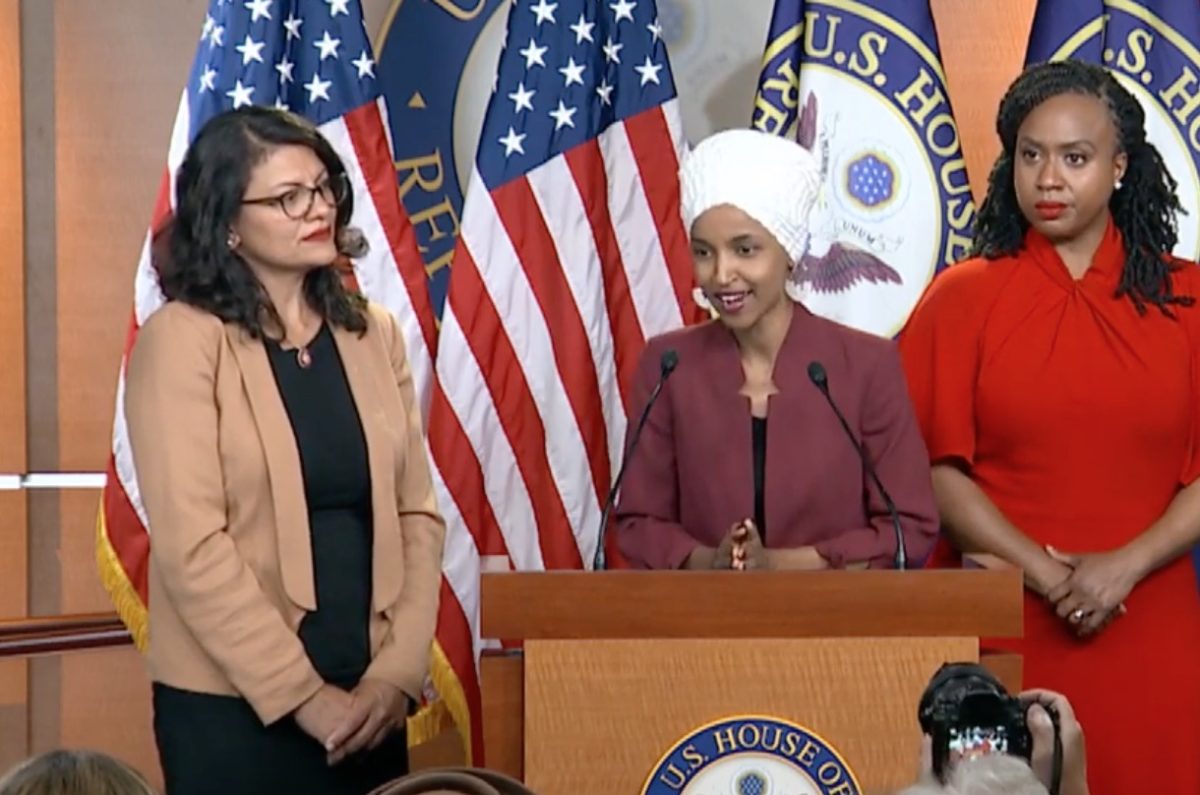 Congresswomen Ilhan Omar (D-MN) and Rashida Tlaib (D-MI) are facing outrage for sharing a political cartoon made by an illustrator with a history of creating anti-semitic imagery.

For the past week, the two progressive congresswomen have been sparring with President Donald Trump and Israeli Prime Minister Benjamin Netanyahu, ever since they were banned from Israel for supporting the Boycott, Divestment, Sanctions (BDS) movement. As this clash played out, The Jewish Daily Forward‘s opinion editor Batya Ungar-Sargon noted that the two congresswomen shared an Instagram story featuring a cartoon of themselves being shushed by Trump and Netanyahu.

Oof. Looks like both Rep. Omar and Rep. Tlaib shared this awful Carlos Latuff cartoon in Instagram stories yesterday. In 2006, Latuff came in second in Iran’s International Holocaust Cartoon Contest, which is a thing that exists, in case you thought the TL couldn’t get any worse. pic.twitter.com/uwyBPAsz7T

As Ungar-Sargon pointed out, the cartoon was made by Carlos Latuff, a controversial figure who has created deeply provocative works to criticize America and Israel.

Back in 2006, Latuff took second place in Iran’s International Holocaust Cartoon Contest for the image below of a Palestinian man wearing a Nazi camp uniform. This isn’t the only time Latuff compared Israel to Nazi Germany, and in his interview with Forward from 2008, he defended the cartoon by comparing Israel’s treatment of Palestinians with how Jews were once treated in Germany.

To whom it may concern: this is the cartoon I participated in the International Holocaust Cartoon Competition (2006) and the interview I gave in 2008 about it for the Jewish Daily @jdforwardhttps://t.co/eSRuKMIjIO pic.twitter.com/WhSROMJMl0

Latuff has denied that he is anti-semitic, but conservative Twitter booster The Reagan Battalion has noted several other cartoons where Latuff was accused of minimizing the Holocaust and glorying in the deaths of American soldiers.

So @IlhanMN and @RashidaTlaib both shared a cartoon by a cartoonist who not only took part in Iran’s holocaust denial cartoon contest, but also celebrates the death of American soldiers. pic.twitter.com/m9tQ0RmfVl

So @IlhanMN and @RashidaTlaib just shared this cartoon by Carlos Latuff who is well known for his work mocking Jewish victims of the holocaust.

WILL A SINGLE DEMOCRAT SPEAK UP? pic.twitter.com/PlhOBGCN2U