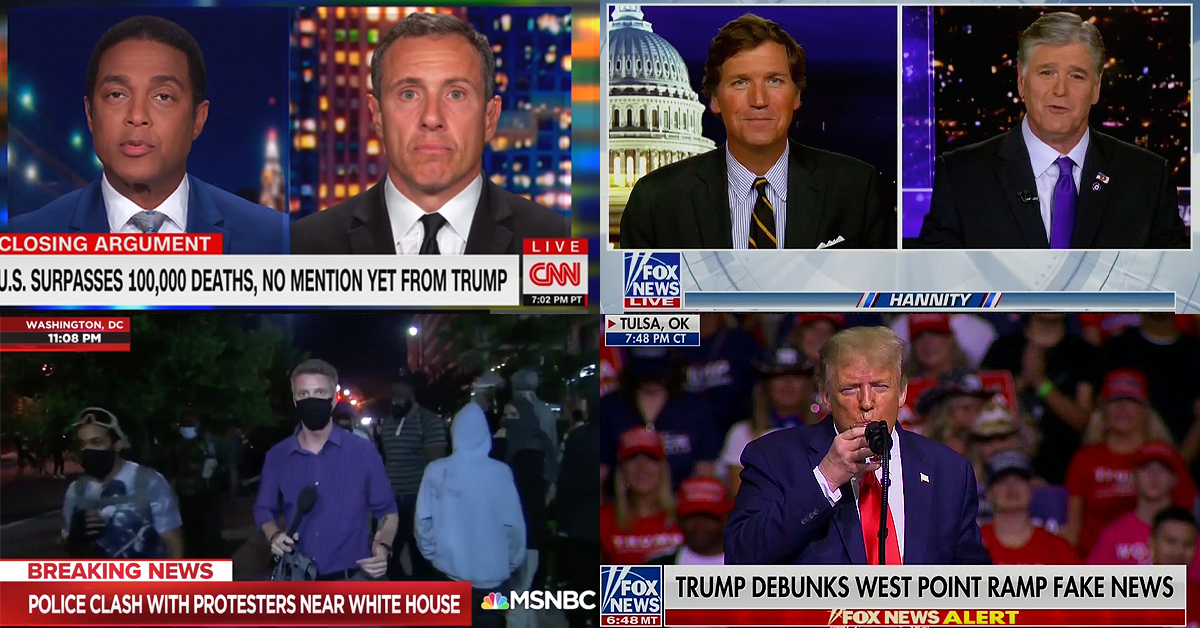 CNN, Fox News and MSNBC drew record ratings in the second quarter of 2020.

As cable news has juggled coverage of the 2020 election, the coronavirus pandemic, and nationwide protests over the killing of George Floyd by police, all three networks drew historic viewership. CNN, bolstered by Chris Cuomo’s hotly debated prime time show, had the most-watched quarter in its 40-year history. At Fox News, Tucker Carlson broke Sean Hannity’s record for the highest-rated quarter for any cable news program in history. MSNBC had its best quarter ever in overall viewers for total day and prime time.

While each network broke records on their own, Fox News boasted the biggest numbers.

Fox News had its largest audience in history in the second quarter, in both total day, with 1.95 million, and prime time, averaging 3.57 million. In the advertiser coveted 25-54 demo, Fox News averaged 366,000 viewers in total day and a massive 624,000 in prime time.

For the first time in its short history, Tucker Carlson Tonight was the top show on cable news, in both total viewers and the demo (4.33 million and 791,000). Both Hannity and Carlson broke Hannity’s previous record for highest rated quarter, which was notched last quarter.

That means Tucker Carlson Tonight ended the quarter with the highest ratings in cable news history.

For the second quarter in a row, Both Hannity and Tucker Carlson Tonight remained the only two cable news shows to average more than 4 million viewers (Hannity drew 4.31 million overall and 754,000 in the demo). Hannity was the top rated show for the month of June, with 4.3 million total viewers and 792,000 in the demo.

Each prime time show earned their best quarterly ratings ever. CNN’s prime time slate performed so well, some shows overtook MSNBC in the demo. Cuomo Prime Time at 9 p.m. beat out Rachel Maddow in the demo — an impressive feat given the MSNBC host’s typical ranking ahead of CNN. Cuomo also beat Maddow in the demo for the month of June, cementing Cuomo Prime Time as not only the most popular show on CNN, but also a competitor against MSNBC and Fox. There were other bright spots for the network in prime time: Anderson Cooper beat out Chris Hayes in the demo and overall at 8 p.m., and Don Lemon beat Lawrence O’Donnell in the demo at 10 p.m.

Erin Burnett Outfront, CNN’s 7 p.m. show, had a notable achievement in the quarter as well, besting MSNBC in total viewers (1.71 million) and the demo (516,000) for the first time in years. Burnett didn’t just beat MSNBC — she earned her own best ratings quarter ever.

The Rachel Maddow Show earned impressive overall ratings for the quarter. Cuomo may have beaten Maddow in the demo (587,000 to 487,000) but the MSNBC host trounced her CNN rival in total viewers (3.08 million to 1.98 million).