Big Girls Don’t Cry – But They Do Run For President

Big Girls Don’t Cry – But They Do Run For President 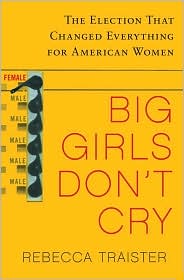 If anyone was going to write the definitive account of what the 2008 election meant for women, it would be Rebecca Traister. As someone who was with her in the trenches covering the perception, coverage and flat-out sexism surrounding the groundbreaking campaign of Hillary Clinton, and then turned around gobsmacked by the emergence of new “feminist” icon Sarah Palin, I have been waiting for this book. I was consumed by the election — and the coverage — at that time, and from the debates to the primaries to the explosion of calls for Hillary to get out of the way to the anger at Hillary and then the anger back of Hillary supporters to her concession, her “18 million cracks” and then re-emergence as a key ally for Barack Obama, only to now be one of the most popular political figures in the nation — through it all I have found myself going again and again to Traister, wondering, “What does Rebecca make of this?” knowing, of course, that she would be the smartest, sanest, most thoughtful voice on the matter. 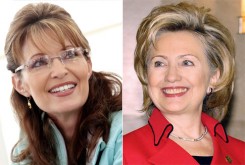 So it is with great excitement that I got her book, Big Girls Don’t Cry: The Election That Chaned Everything for American Women. I have not finished it, but already what I have read has brought it all back (some of it a little dizzyingly, PTSD-style) and it’s smart as hell. In fact, so far it’s one of the smartest political books I’ve seen. And don’t be fooled — it’s a political book. It’s definitely a feminist book, too, but this is a book about the evolution of the American political infrastructure, voting community, campaign process, and overall society. The 2008 education was in so many ways a huge education for everyone involved — and that includes the lessons it gave about gender politics and the complicated, fraught nature of the discourse both on the left and the right.

To be honest, this is the one book about the election that I’ve been waiting for. I was also waiting for Notes From The Cracked Ceiling by Ann Kornblut and and You’ve Come A Long Way, Maybe by Leslie Sanchez, but they both wrote these books as one area of coverage that they drilled down in; Traister has been steeped in this, all of this, for years. So I have to say I was surprised not to see this book exploding. Today is its release day but when I do a search in Google News I only see 7 results. (Okay, having the same name as a famous Frankie Valli/Four Seasons song not to mention a gut-wrenching, soul-searching ballad sung mostly half-dressed by Fergie probably doesn’t help.) But I’m 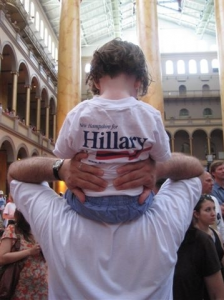 gonna say it: This is a big, important, definitive book on the other historical first in the 2008 election, and in this so-called “Year of the Women” — more fricking people should be paying attention.

When I say “more fricking people” I mean people all over, but let’s just for expediency’s sake call it “The Establishment.” Even if the Establishment, right or left, doesn’t actually give a damn about gender parity, they should give a damn about voting power. The oft-written about “Wal-Mart Moms,” the “Pumas” who made so much trouble for the Dems in spring/summer 2008 (remember how reluctant they were to fall into line, feeling they were ignored?), the more and more women who are running — and winning — on either side. Meg Whitman. Carly Fiorina. Linda McMahon. Sonia Sotomayor. Elena Kagan. Michelle Obama. Michele Bachmann. The Mama Grizzlies. SARAH PALIN. 2010 is arguably being turned on its head by women, individually and collectively, just as much as 2008 was. Good Lord, don’t these people want to understand why? That’s how you make money, get votes, keep power. Hell, there might even be a few ratings spikes in there as well. 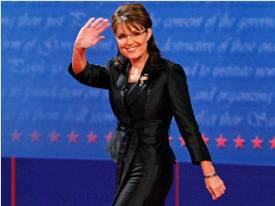 And for those who keep things on a more lofty plane, well, do you think two years later you could possibly fully understand the significance of that seething, boiling, frothing cauldron of crazy-town that was the 2008 election? It’s making me crazy just thinking about it, and I didn’t even know what Death Panels or the Tea Party were yet. I can’t understand why people are not RUNNING to Traister’s book like the latest Harry Potter, just to glean some insight that will make them smarter, better, fuller writers, commentators, all-knowing pundits. It’s not as if the craziness is over by a long shot. (I’ve got three words to you on that point, baby: RESTORING HONOR RALLY.) If America can elect its first black president in 2008 yet have the Beer Summit in 2009 and Shirley Sherrod in 2010, do we really think the knotty, uncomfortable questions raised by Hillary’s 2008 run and Palin’s 2008 ascension (not to mention Michelle’s 2008-and-beyond tightrope) are so easily resolved? No way — not if people actually look at them. 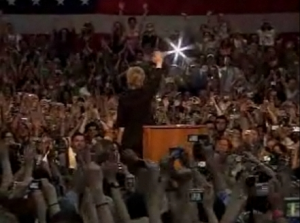 Traister spoke to Curtis Sittenfeld at her home base, Salon, and said as much about the vast, unmined treasure trove that was the 2008 election:

When Michiko Kakutani wrote her “Game Change” review in the New York Times, she started with some sentiment like, “Ugh, who needs another book about the election?” But my reaction to that — and every other book that is going to come out about the election, including mine — is that, oh my God, everything in America was busted open during that election. Between race and gender and Obama and Hillary and Palin, there was so much that had never happened before in American history. There will be scores more books about this election, and each of them will offer their own set of revelations about this election, which happens to be a completely gripping narrative, by the way. The greatest thing that happened to me writing this book was remembering how great the story of the election is, so even if you lived it, even though I’d written about it as it was taking place, when I went back to write about it in retrospect, I was like, “Did that really happen?”

It did. So we should do our damnedest to try to understand it. Buy Rebecca Traister’s book. It’s called Big Girls Don’t Cry.

Also, don’t confuse it with an old-timey song from the 50s, or a Fergie song.

Photo of Hillary t-shirt worn by child and Hillary farewell speech by Rachel Sklar via HuffPo; photo of Palin by Reuters via Politico.