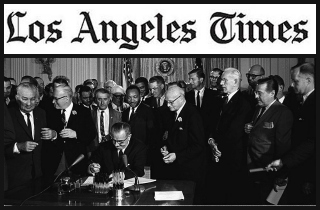 In an article recapping the 50th anniversary of the “March on Washington,” the Los Angeles Times claimed that the Democratic Party led the passage of key civil rights legislation during the 1960s. In return, critics pointed out that a greater percentage of Republicans than Democrats supported the Civil Rights Act of 1964.

On Wednesday, while reviewing the lack of Republicans present at the MLK rally, Times reporters Kathleen Hennessey, Richard Simon, and Alexei Koseff wrote: “Since Democrats led the passage of civil rights legislation that marchers pushed for in 1963, Republicans have struggled to recover with black voters”.

Conservative media-watching outfit NewsBusters scorned the authors for “labor[ing] to make the GOP look bad for the Democratic unanimity of the [MLK] event” while “none of them could locate the actual Sixties voting record” they cited as evidence of the Republicans’ historical parting with black voters.

Los Angeles-based conservative radio host Larry Elder also spoke out against the paper, tweeting out the fact that a greater percentage of Republicans voted for the monumental Civil Rights Act of 1964 than did Democrats:

Elder also noted that Republican Sen. Everett Dirksen (Ill.) was praised by President Lyndon B. Johnson as a “hero of the nation” for his efforts in ending a Democratic filibuster against the Civil Rights Act: