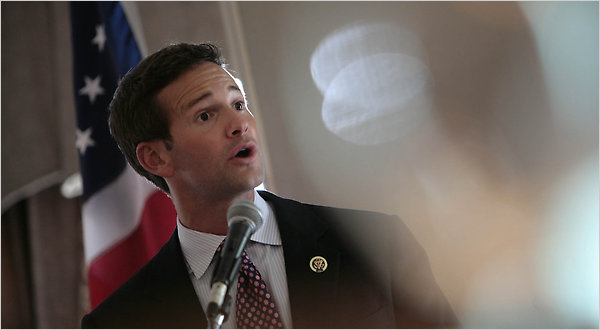 Judy Garland is a “gay icon.” Her daughter Liza Minnelli also counts. Toss in Bette Midler and Madonna and Lady Gaga. You could probably even include Christiano Rinaldo and David Beckham as “gay icons,” of a sort.  But it’s fair to say that a conservative member of Congress who is opposed to gay rights probably isn’t a “gay icon,” even if the gays find him attractive.

That didn’t stop New York Times writer Ashley Parker for gushing that Rep. Aaron Schock (R-Ill.) was a “gay icon” in her breathless fashion feature about the hunky Congressman with the six-pack abs and “interesting” fashion choices.  As FishbowlDC’s Betsy Rothstein points out, Schock has become “media meat” again with other gossip columnists repeating the “gay icon” line.

The gays are having none of it.  The boys at Queerty said that while Schock may be someone you’d want to, well, “meet,” it didn’t mean he was a “gay icon.”  The Advocate also dispelled the notion that Schock deserved icon status.  Radio host and longtime gay activist and journalist Michelangelo Signorile tweeted: “Good point: How can someone who is antigay be a gay icon? Only the NYTimes could tell you.”

So, to clarify.  While the D.C. gays may be talking about Schock and the gay listservs may be “heating up with chatter,” it’s not because Schock is a “gay icon” who has embraced gay causes and gay admirers.  The discussion about his fashion sense and abs and single status isn’t necessarily being done in admiration but, as Queerty explained, “[t]he dude is against same-sex marriage — he is not somebody this community celebrates.”