NY Times Magazine Celebrates Gay Teens; But Does It Exploit Them, Too? - Part 2 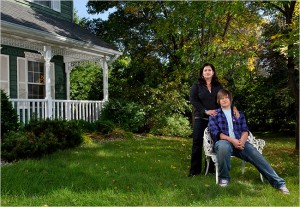 But the choice of some quotes and anecdotes — admittedly juicy — strikes me as questionable. Take for instance, the story’s forays into bisexuality: “Bisexual girls have it the easiest,” says one 13-year-old. “Most of the straight guys at school think that’s hot, so that can make the girl even more popular.” Hm. Later, an eighth-grader quips, “Yeah, he’ll make out with anyone. Totally bisexual.” And though we’re supposed to chuckle at his command of sexual terms and ideas, I feel manipulated into doing so. It’s like hearing children curse.

At one point, the writer tours a Northern California school with three students who proceed to speculate on the sexuality of their classmates as they pass them on the school grounds, using code words so they’re not overheard. The entire scene is highly representative of the adolescent rumor mill and scandalous gossip, but does it really have a place in the Times, ripe for adults to objectify?

Then, take this passage, shameless in its provocation:

Alison turned to me and recalled a recent “lesbian moment” of hers. “I totally had the hots for this girl in ‘Jesus Christ Superstar,’ ” she said with a giggle. “I was, like, ‘Whoa, I’m really attracted to you right now!’”

“Jesus was hot in that, too,” Justin offered.

I’d hate to think that my squeamish reaction makes me a prude. I believe children should embrace and openly discuss their sexual selves, but amongst their peers and with mediators, not in the media. Having not so long ago been that age — and remembering it with a mix of fondness and fright — I say that kids are largely too fragile, too fickle and too precious to be utilized in this way. And lest it seem to only be about sex, I feel a similar queasiness when thinking of the children in a recent New York magazine exposé of Little League: a fascinating subject, certainly, but should kids be sorting out their feelings to a reporter in the pages of a national publication?

To be sure, I see the article as overwhelmingly positive and of great importance. The piece is a welcomed lifeline to any child or parent overwhelmed by sexual identity who happens upon a copy, online or in print, and is thus delivered hope about the possibility of acceptance. But like so much engaging writing, it conjures a lot of conflict. Would I rather the article not exist at all, or worse, be half as entertaining? Probably not. I just fear that not every reader will be equipped with enough empathy to use this valuable tool toward change in a positive way. I hope I’m wrong.

Photos by Brent Humphreys for the New York Times