New Yorker Cover Craptastically Fails on Past Presidents’ Reaction to Trump; Here’s Why 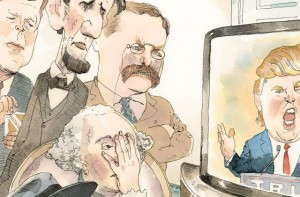 The next in a line of thousands to attempt to portray Donald Trump as the worst thing to happen America since Caddyshack 2 (or at least Hangover 2) comes in the form of that New Yorker Magazine cover above. Per cartoonist Barry Blitt:

“In most historical portraits, presidents are noble and dignified. My biggest challenge was to alter the presidents’ expressions to make them reflect attitudes of consternation.

“Teddy Roosevelt generally looks angry and somewhat appalled, so he was the easiest,” he adds.

In other words, if presidents like Franklin or Teddy Roosevelt or George Washington witnessed the kind of rhetoric offered up by Trump, the reaction would be horror, disgust, shame. To that end, wouldn’t it be interesting to see the cover reversed with Trump on the outside looking in at Washington, who was a slave owner since the age of 11? And just how well did our first president treat the 318 slaves he owned at his estate in Mount Vernon (Virginia)? Per MountVernon.org:

What is clear is that Washington frequently utilized harsh punishment against the enslaved population, including whippings and the threat of particularly taxing work assignments. Perhaps most severely, Washington could sell a slave to a buyer in the West Indies, ensuring that the person would never see their family or friends at Mount Vernon again. Washington conducted such sales on several occasions.

So yes, one could see why Washington would be appalled by Trump’s rhetoric on immigration… given his own humane record. As for our first president’s discourse on other minorities, here was his take on American Indians:

“Indians and wolves are both beasts of prey, tho’ they differ in shape.”

OK, so how about FDR? He appears the most shocked by Trump than any other president in the cartoon above. This, of course, is the same president who made deportation look swell compared to his approach of dealing with those living in the U.S. legally during World War II, which included constructing through executive order what he called “concentration camps” for Japanese-Americans. Via PBS:

Following the Japanese attack on Pearl Harbor on December 7, 1941, President Franklin D. Roosevelt issued Executive Order 9066, which permitted the military to circumvent the constitutional safeguards of American citizens in the name of national defense.

The order set into motion the exclusion from certain areas, and the evacuation and mass incarceration of 120,000 persons of Japanese ancestry living on the West Coast, most of whom were U.S. citizens or legal permanent resident aliens.

These Japanese Americans, half of whom were children, were incarcerated for up to 4 years, without due process of law or any factual basis, in bleak, remote camps surrounded by barbed wire and armed guards.

They were forced to evacuate their homes and leave their jobs; in some cases family members were separated and put into different camps. President Roosevelt himself called the 10 facilities “concentration camps.”

Also included in Blitt’s cartoon is Teddy Roosevelt. You think Trump’s comments about Mexican illegals are horrible? Here’s a few gems to chew on via Old Four Eyes:

“I don’t go so far as to think that the only good Indians are dead Indians, but I believe nine out of ten are, and I shouldn’t like to inquire too closely into the case of the tenth.”

“Nowadays we undoubtedly ought to break up the great Indian reservations, disregard the tribal governments, allot the land in severalty (with, however, only a limited power of alienation), and treat the Indians as we do other citizens, with certain exceptions, for their sakes as well as ours.”

If Teddy were alive to witness Trump on cable news, he would be appalled, yes… for being far, far too soft.

As for JFK being included here, the only question is why? Apparently this is supposed to be a portrait including America’s greatest presidents. Say what you will about Kennedy symbolically, almost all historian scorecards wouldn’t rank him in the Top-10 presidents of all time given his shaky first term before being assassinated as he approached his 4th year in office. Cuban Missile Crisis? Good (See: Thirteen Days with Kevin Costner, which is an excellent reenactment of said crisis). Bay of Pigs? Bad. Great speaker? Yes. Great executive? Not exactly (most of his proposals from a legislative perspective died on Capitol Hill despite having control of congress). If I’m the Canadian-born Blitt, I would have gone Reagan here instead of Kennedy, simply for Trump breaking his so-called 11th Commandment alone: “Thou shalt not speak ill of any fellow Republican.”

Is Trump loud, brutally candid, and — as he describes it — angry? Yes.

Would America’s past presidents be horrified by what they’re hearing? Based on their own words and own actions… ummmm… no.

Just another day, another swing, another miss by another media outlet looking to jump on the Trump sells/rates/brings traffic bandwagon.