Twitter’s blue check mark is a contentious little tech symbol, seen by some as the divide between the social media giant’s haves and have-nots. Ostensibly a Verified user on Twitter is more trusted, or at the very least, more held to account for what they say. And in a lot of media outlets, those users are given a bit more weight than just an average Twitter user.

So when on MSNBC’s All In with Chris Hayes this week, a tweet from a Media Matters researcher with a popular Twitter feed that live tweets Fox & Friends was highlighted on screen, and the image showed his account name with that little contentious blue check that didn’t belong, they were called out for it.

How closely do @MSNBC & @Mediamatters work together? So close @chrislhayes show doctors a tweet from MMFA’s @revrrlewis.
See image 1 and image 2. Image 1 shows MSNBC doctoring the tweet to give MMFA dude a prestigious blue checkmark; Image 2 shows he doesn’t have one!
Lean Fake! pic.twitter.com/Nvq34lW0Yd

…and in full articles.

It wasn’t just people complaining though, the account-holder in question, Bobby Lewis, had a great reaction to the change in status.

this is the closest i'll ever get to being verified https://t.co/VEw4jsx1B0

At the Daily Caller, associate editor Virginia Kruta left open the possibility that this was simply a standard template into which the tweet was plugged.

As to how that blue checkmark appeared in MSNBC’s graphic? Maybe a photoshop, maybe a standard tweet template. Either way, it’s fake news.

However, the Tweet from Lewis was part of a segment on Fox News host Tucker Carlson and other Trump-ian media figures, and their reactions to news about and downplaying fears of white supremacist terror. In that same segment, they featured a tweet from KKK jackass David Duke. It was the same template, but no extra Blue Check. 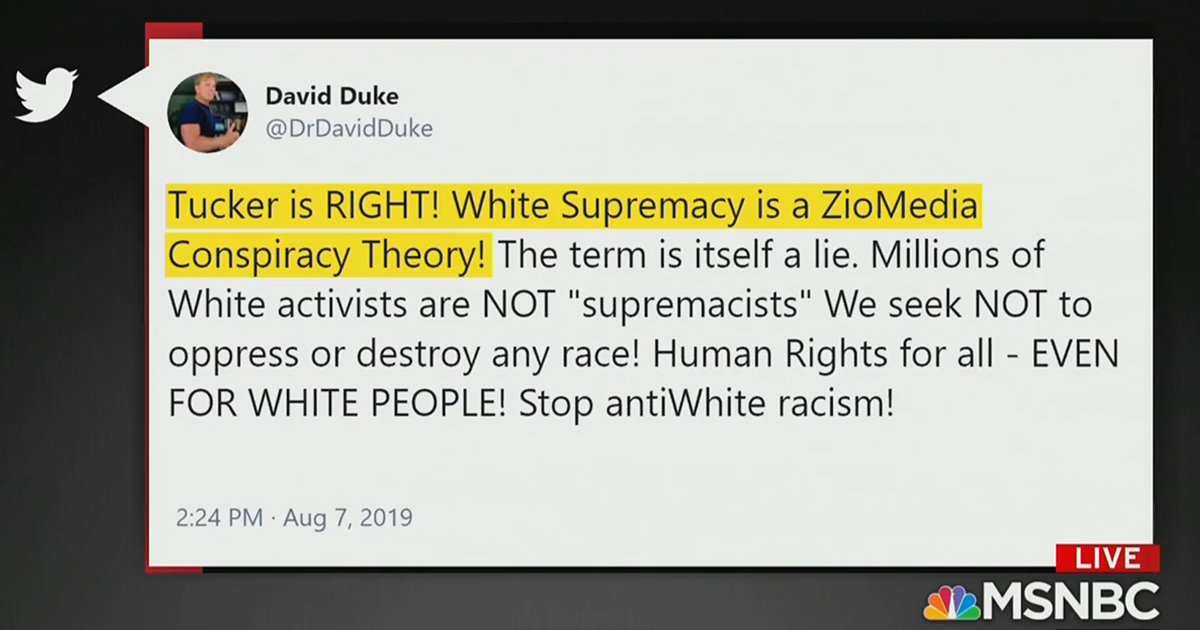 Which goes to show it wasn’t, at the very least, the only template available. When packaging the segment, a decision was made for each tweet, and in the case of the man from Media Matters, a blue check magically bestowed.

Kruta made it clear from context that this isn’t a big deal or huge controversy. But it is what it is, and it appears that what it is was a decision to add a little extra credibility to the tweet from Bobby Lewis (who probably ought to have a blue check, though.)

For the record, here is video of each tweet from All In, starting with Duke.

Also for the record, we did ask MSNBC for clarification and did not receive any reply.

Also, what about Red Checks for certifiable dirtbags on Twitter? Just embrace the whole fake check thing? MSNBC obviously has that capability.

Something to chew on.