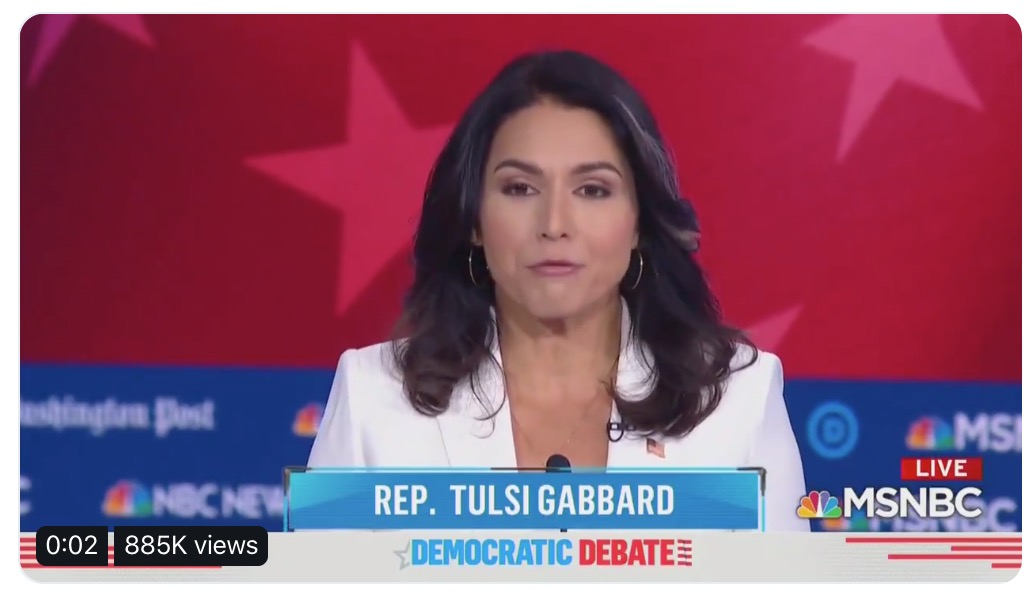 A Twitter account operated by the Trump campaign promoted a curious moment from Wednesday night’s Democratic Primary debate. While it’s not unusual for a political party to feature potentially embarrassing moments from opposing candidates or those that highlight stark policy differences, the “Trump War Room” featured a moment in which Rep. Tulsi Gabbard ripped the Democratic party in what stood out as an oddly promotional manner.

The moment featured was brief, and showed Rep. Gabbard saying “Our Democratic party, unfortunately, is not the party that is of, by and for the people.”

?”Our Democratic Party, unfortunately, is not the party that is of, by and for the people.” #DemDebate

?”Our Democratic Party, unfortunately, is not the party that is of, by and for the people.” #DemDebate pic.twitter.com/B8Lq8i1NrR

A Democratic presidential hopeful hitting her own party is a unique moment, but given the unproven allegations surrounding Gabbard’s curious role, eyebrows were raised! Former Democratic Presidential candidate Hillary Clinton suggested that Ms. Gabbard is ostensibly being “groomed” as a third party candidate to help Trump overcome what (currently) looks like long odds in his reelection efforts.

This was not lost on blue-checked Twitter. To wit:

Tulsi Gabbard, literally *cutting an ad for the Trump Campaign* during her time at the #DemDebate (dont pretend like this was not exactly the plan when she got up there to spit this directly at the camera) https://t.co/lnN6xLmwCL

Y’all, how long are we going to keep up this charade?#DemDebate pic.twitter.com/tG5W3M68yi