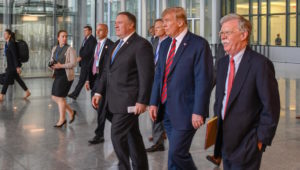 The Washington Post reports that President Donald Trump has grown frustrated by his own administration’s ineffective Venezuela policy and now blames his national security adviser, John Bolton, for trying to get him “into a war.”

Bolton has taken an aggressive public posture in pushing for Venezuelan President Nicolas Maduro’s removal, and has even taken the unusual step of tweeting at the strongman, encouraging him to leave the country for a “long, quiet retirement.”

I wish Nicolas Maduro and his top advisors a long, quiet retirement, living on a nice beach somewhere far from Venezuela. They should take advantage of President Guaido’s amnesty and move on. The sooner the better.

Citing anonymous administration and White House officials, the Post claims Trump now feels like he was duped by Bolton into thinking that Maduro’s overthrow would be easy. According to the Post: “Trump has said Maduro is a ‘tough cookie,’ and that aides should not have led him to believe that the Venezuelan leader could be ousted last week, when Guaidó led mass street protests that turned deadly.”

Since officially recognizing opposition leader Juan Guaido as that country’s interim president back in January, Trump has watched an attempted uprising by Guaido’s supporters publicly sputter and fail, while a small contingent of Russian soldiers have been welcomed into the country. Bolton has called out Russia for “interfering” in Venezuelan affairs, but after a call between Trump and Russian President Vladimir Putin last week, Trump seemingly undermined Bolton and his administration’s hardline stance, saying Russia “is not looking at all to get involved in Venezuela other than he’d like to see something positive happen for Venezuela.”

Despite his frustration, Trump reportedly has no plans to change the course of U.S. foreign policy in Venezuela, nor does Bolton face any threat of being removed from his job.