Twitter Collectively Loses Its Mind Over Trump’s Insane Interview With Axios: ‘I CAN’T BELIEVE THIS IS REAL!!’ 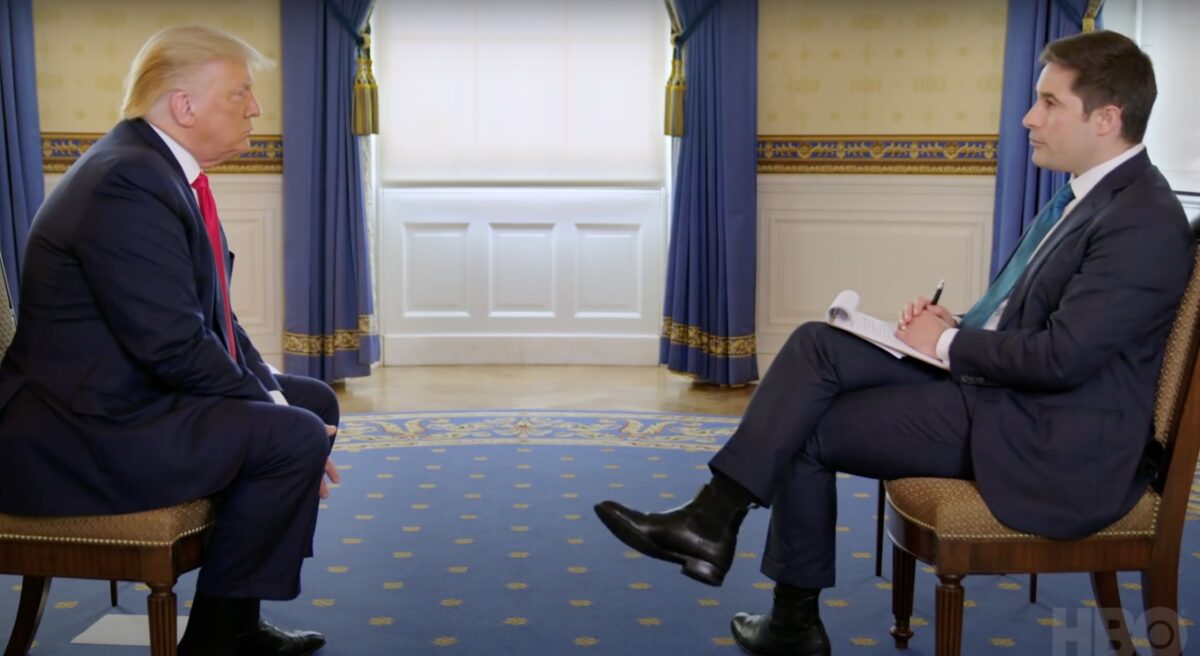 Axios released Jonathan Swan’s full interview with President Donald Trump on Monday night, and political audiences were completely blown away by the many stunning moments it provided.

During the interview, Trump defended his well wishes to Jeffrey Epstein’s alleged accomplice Ghislaine Maxwell, attacked John Lewis, stood by his decision to hold campaign rallies, and went into bizarre defenses of his leadership throughout the coronavirus pandemic. That was only a fraction of the 37 minute interview, and the list of wild, strange moments went on and on.

As audiences digested the interview all the the way into Tuesday morning, many observers praised Swan’s handling of Trump since he honed in on the facts and successfully pressed the president over his statements and claims:

Frankly, there should be several TV news anchors/broadcasters out there who have interviewed Trump who should be rather embarrassed watching Swan school them on how to properly do their jobs.

He didn’t show up looking for gotcha moments, let Trump speak but also called him out in real time. https://t.co/csNRsU4vz9

This excellent @jonathanvswan interview is yet more evidence that even basic follow-up questioning – like asking wait, hold on, what are you even talking about – immediately exposes Trump’s lies. And yet it has almost never happened.

The two groups who probably did not like this ⁦@jonathanvswan⁩ interview of Trump are the most devoted Trump super fans and the lower tier Sunday show hosts who are suddenly concerned for their job https://t.co/NtoyUsKgHs

By and large, however, many viewers were horrified as they watched Trump shower praise on himself, deny any shortcomings, squirm through follow-up questions, and make every possible effort to spin the data on coronavirus testing and the pandemic’s impact:

This entire interview is worth watching. It was disturbingly revealing in many different ways. https://t.co/xVfnD4Bq7m

TRUMP on 1,000 Americans dying from coronavirus each day:

“It is what it is.”pic.twitter.com/dgzc1s7Ptt

Watch here as the president of the United States repeatedly denies the significance and even existence of a mass extinction of American lives.

There has never been a better example of how Trump does not use data to inform decision-making but to simply to spin existing beliefs. The numbers are merely tools to assert he’s right. https://t.co/pvmeO4kzmS

I know we’re used to this kind of thing from Trump. But it’s worth pausing for a second on this. The combination of the refusal to recognize others’ achievements and the absurd boasting about himself is more than tasteless. It really is a sickening window into a deformed soul. https://t.co/ZxKy5DH02P

He just can’t handle this moment. He’s so far out of his depth. I’d think this exchange was sad if he wasn’t the most powerful man in the world. https://t.co/Di3aQod9FW

For Trump, shame is like death—it must be avoided at all costs. It’s why every interview is fundamentally the same: he’s pressed to admit a mistake and instead he denies reality and the premise to make shame impossible. Today, coronavirus; yesterday, Russia; and so on. https://t.co/Y90aJ32f9c

His narcissism cannot be distinguished from parody. https://t.co/2jHVXCc8EQ

It’s honestly hilarious that this is the guy who supposedly wants MORE debates https://t.co/uB0rsZVPFr

I don’t normally say anything about stuff like this because really, what is there to add? But I CAN’T BELIEVE THIS IS REAL!! ? https://t.co/aK2EqSz02V

How can you watch this exchange and think that this person should be in charge of managing the response to a deadly pandemic? https://t.co/tPnzlUgOuU