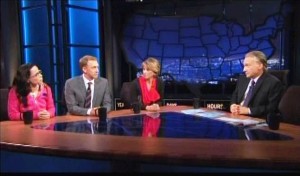 There are so many Republicans potentially courting the presidency in 2012, officially or unofficially so, that it’s quite easy to get mixed up as to who is a serious candidate and who isn’t. On last night’s Real Time, however, actress Janeane Garofalo stumped Bill Maher and his panel with the bizarre, unsourced news that Ohio governor (and former Fox News commentator) John Kasich was “Fox’s candidate” in 2012.

Maher’s panel last night, which included Glee‘s Jane Lynch (who graciously provided a dramatic reading of the Weinergate chat logs), The Atlantic‘s Joshua Green, Garofalo and The Wrap‘s Sharon Waxman, took an extensive trip around the main topics of political conversation of the week, beginning with Rep. Anthony Weiner and ending with the 2012 elections. Unsurprisingly, most of the panel did not believe that Rep. Weiner should resign (note: the segment was filmed before police began investigating his interactions with an underaged girl). The odd man out on this topic was Green, who believed that his extended tenure would cause people to lose faith in government. “If you want to protect the social safety net,” he argued, “you can’t have an American populace with no faith in government.” He did add the caveat that Republicans “don’t care, they hate government,” and that only Democrats would suffer from his stay.

Maher, on his part, was too busy being shocked by the indecency of the MTV Movie Awards to bother with Rep. Weiner– a startling position in which to find the liberal comedian. Noting that he wasn’t “a prude,” he was still uncomfortable with the content of the program because “this is a kid’s show,” and that “if you’re the parent of a 12-year-old and this is okay with you, shut up about Anthony Weiner.” The “this” in question was Justin Timberlake inappropriately grabbing Mila Kunis, which Maher also somehow turned into a race issue because Timberlake had, a decade ago, also groped Janet Jackson.

The topic then turned to Sarah Palin, and Green gave her the spirited defense his long-form piece on her gubernatorial tenure allowed her. Maher believed that the “bar was a lot lower for her” because she was a “pretty girl,” which may give her a shot in the 2012 elections– an organic transition into the 2012 race. When the question of whether Palin could win without Fox News and Roger Ailes supporting her, Garofalo piped up to say, “John Kasich is Fox’s candidate,” receiving a chorus of blank stares. “He’s not even in the race,” Maher added, while Green tried to help by suggesting maybe she meant Texas governor Rick Perry. “No, not Rick Perry, John Kasich,” she insisted, at the confusion of everyone else at the table. Awkward, but in a world where Donald Trump is still a possible presidential candidate, Herman Cain is an actual frontrunner in the race, and Alec Baldwin has any sort of political clout at all, can you blame her for being a bit confused?

The extended Real Time discussion via HBO below: