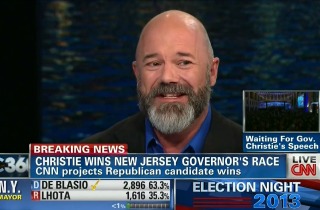 On election night, 2013, a CNN panel convened to discuss the ramifications of New Jersey Gov. Chris Christie’s reelection with the support of more than 60 percent of the Garden State’s voters. Columnist Andrew Sullivan said that Christie poses a threat to Democrats should he decide to run for president in 2016. His only downfall, he said, was the governor’s “egomania.”

“This is a fantastic result for Chris Christie, especially the demographics,” Sullivan said. He added that Christie’s pitch to the GOP in the primaries will be to point to his reelection results and say, accurately, that he can attract women and minority voters.

“I would say it’s qualified by that one statistic which is that only 50 percent of New Jersey think he’d be a good president,” Sullivan added. “46% say not, because the issue with Chris Christie I think is temperament. It’s his bullying tone, it’s his slight egomania.”

He noted that he still won the support of New Jersey’s women “despite” this factor.

CNN host Newt Gingrich disagreed with Sullivan’s assessment. He noted that it is rare for the residents of the state a future president comes from to be able to picture “their guy” in the White House.

“It was not that he would be president, but he’d be a good one. That’s the question,” Sullivan shot back.