Andrew Sullivan To Matthews: ‘With Any Luck’ America Won’t Be ‘Lone Superpower’ in 20 Years
video

Andrew Sullivan To Matthews: ‘With Any Luck’ America Won’t Be ‘Lone Superpower’ in 20 Years 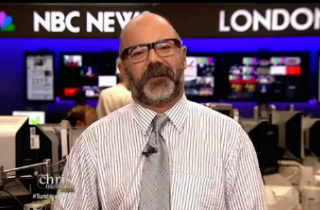 Appearing on the final episode of The Chris Matthews Show, blogger Andrew Sullivan expressed a desire to see the end of American imperialism, telling the host that “with any luck” the United States will no longer represent the “lone superpower” of the world.

“Are we still going to use that word ‘superpower’?” Matthews asked Sullivan. “I don’t even like it very much. The ‘lone superpower.’ Are we going to be that 20 years from now?”

“With any luck we won’t be,” Sullivan replied, eliciting laughter from his co-panelists.

We will understand what the founders understood. When you leave America and you go back and you look at it from like over here, and you see this giant continent with two vast oceans in between it, and it feels it’s paranoid and terrified of the rest of the world, and wants to have this enormous military industrial complex to control it, you just scratch your head after a while and realize that Eisenhower was on to something. So was Washington, so was Jefferson. I think the transition to a post-imperial America is coming. I think it’s overdue and I welcome it.

Sullivan was likely referring to two of our Founding Fathers’ well-known remarks generally regarded as “anti-imperialist”: Washington’s farewell address, in which he warned about getting involved in the capricious politics of other nations; and Jefferson’s inaugural speech, in which he famously said “Peace, commerce, and honest friendship with all nations, entangling alliances with none.”

Watch below, via NBC News: