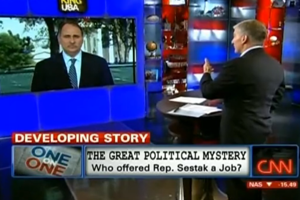 If White House Senior Adviser David Axelrod and Congressman Joe Sestak were expecting a hard time from the press about Sestak’s claim that the White House offered him a job to dissuade him from running against Sen. Arlen Specter, they may not have been expecting it on John King, USA. But host John King refused to let either of them off the hook without an answer, asking both to clarify the issue in the interest of public trust. What he got in return was five minutes of non-answers and awkward question evasion.

“Candidate Barack Obama promised the most transparent administration in history. If these conversations did happen, it marches up into the gray area, perhaps into the red area of a felony. It is a felony to induce somebody by offering them a job. Why won’t the White House just say either Congressman Sestak is lying, or somebody has some conversation with him about a job?”

Axelrod responded to the claim that either the Congressman was wrong or the White House was by saying he believed Rep. Sestak would agree with what he had to say. While he didn’t quite get an answer he wanted, King still added that “I’m not trying to be a jerk, here,” at the end of the interview. If he felt a little shy at the end of the Axelrod interview, however, he brought none of that to his short talk with Rep. Sestak, asking the same questions and receiving even more veiled answers like “I’ve said all I’m going to say on the matter” and “we should be talking about how people are being slammed in this economy.”

The sum of the interviews was not exactly a Crossfire-style shout-fest, but on a program that can be a safe haven for middle-aged political married couples to sit around on couches, it was something of an anomaly, and one gets the sense from both Sestak and Axelrod that they were not expecting the type of journalistic bite they got out of King.