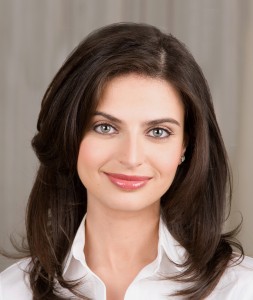 It’s a fast rise for financial correspondent Golodryga, who joined the network in July 2007.

From ABC’s report on the story:

“Since coming to ABC News in July 2007, Bianna has distinguished the network with her reporting on the economy and recent financial crisis,” Westin said in an e-mail to the ABC News staff about the announcement.

Golodryga is a protege of CNBC’s Maria Bartiromo, who she has been compared to. She also started her career as a producer, than as an on-air correspondent, for CNBC. She’s also recently engaged to White House budget director Peter Orszag, who she enjoys tweeting about: “My fiance is by far the best looking man at the correspondents’ dinner. Even if I have a vested interest.” (Cute or gag, your choice.)

This is a good chance to check in with our original Mediaite Oddsmakers when Diane Sawyer‘s Good Morning America co-anchor seat opened up in September. Here’s a few of who we had listed as possible replacements, and where they are now:

• Alexis Glick – No longer with FBN. Still up in the air where she ends up next.