Bill Maher: “The Problem Isn’t Too Little Civility… It’s That There’s Too Much” 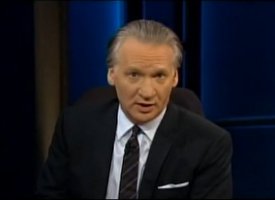 After briefly discussing Keith Olbermann’s fate with Rachel Maddow, Bill Maher closed out Real Time by donning his contrarian cap and taking on the issue of civility in political discourse. Some, like President Barack Obama, want more of it. Maher wants less. Why? Well, as Maher sees it, “civility” and ‘finding common ground” really only benefits Republicans.

Maher ridiculed bipartisan State of the Union seating as an idea out of “an episode of Glee,” and then ridiculed the idea that “forced niceties” would make another tragedy similar to the Tucson shooting any less likely:

“A lunatic uses a Glock to shoot 19 people, and our answer is, ‘Don’t try to control guns or nuts, just be more polite.’ Now, I’m just a hockey mom, but it seems to me when a madman kills people, the problem isn’t the First Amendment – it’s the Second.”

He went on to say that Republican praise for Obama’s speech benefited the party politically, as “the party of assault weapons didn’t get blamed for the assault.” (He also felt the party avoided deserved blame on the oil spill and the 2008 financial crisis.) And he had harsh words for Obama himself, criticizing him for never blaming Republicans when he gets the chance, “because he wants them to like him so badly.”

Then there was a weird line about Obama doing everything humanly possible to make Republicans happy “except using bleach,” (perhaps meant as a dig at Republicans for not accepting Obama because he’s black?), and a shot at Democrats in general for only ever finding “common ground…right where the Republican was already standing.” Maher then turned the focus back to gun control/lack thereof, and said Republicans “never move an inch on anything.” Of course, a provocative rant, but not exactly breaking new ground for Maher. Video, via HBO, below.