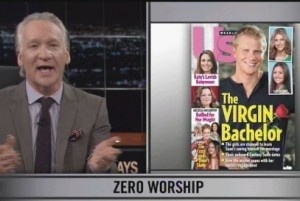 Bill Maher took on the Catholic Church in his final New Rule of the night, and more specifically, the gossip-like, borderline fawning coverage from the media over every single thing the new Pope has done. Maher said the media needs to stop giving such “ridiculous, over-the-top coverage” to a “virgin bachelor,” likening it to a “papal tabloid” and asking why the conventional wisdom is supposed to be how the job of pontiff is a “burden.” He boiled down the main job of the Pope thusly: “you’re selling an invisible product, it doesn’t get any easier than that.”

Maher pointed out that in no other business could the people in charge be publicly exposed as implicitly covering up a child sex ring “and you still keep your customers.” But he also pushed back against the supposed eternal wisdom of the Catholic Church, saying most of what people consider to be doctrine straight from Jesus was a lot like the writing process on Maher’s show. “It’s a bunch of guys sitting around making up new rules.”

Maher ticked off a list of doctrine from confession to priests having to be celibate to even infallibility, which Maher deemed “another rectum-derived edict, and mockingly said it’s an “eternal truth that’s 11 years younger than the escalator.” He recalled how it used to be against Catholic doctrine to eat meat on Fridays, and then one day the Pope suddenly reversed that.

Maher settled on a final analogy to describe the workings of the church. He said religion is “like Wikipedia, everyone can write something in.”