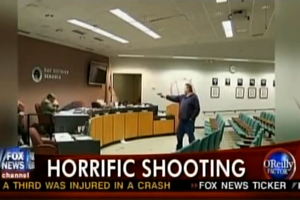 The disturbing news of a lone gunman opening fire on a Florida school board hit the airwaves yesterday in the most brutal form it could— in unedited video. The footage first aired on CNN, sparking a discussion on just how graphic a video had to be to be barred from the airwaves. From his comments, it appeared Bill O’Reilly would be opposed to the airing, except the Factor showed the shooting in great detail tonight– five times.

“Should the media be showing this to the country?” O’Reilly asks in the opening of the program. “This” is a video of a man named Clay Duke shooting at a seated Florida school board, after very audible pleas of “please don’t” from one of its members. Duke was upset for personal reasons and later turned his force fatally upon himself. The images of Duke actually opening fire aired four times after that opening, either with O’Reilly hastily saying “viewer warning” several seconds before the video went to commercial or with the words “viewer warning” in the chyron simultaneous with the footage. Upon actually arriving at the segment, O’Reilly tells viewers to “please click off right now if violence disturbs you,” though, had they been watching the rest of the program, they would have already seen the clip four times. He later reminds viewers that, when speaking their mind on the online poll about whether the media should air the footage, “I gave you a viewer warning; I told you what was coming,” in a tone that indicated it was probably at least adequate to tell viewers before they see real gunshots.

The results of the poll will have to wait for another day, but the ethical question of whether journalists should air this footage at all seems compromised by the fact that, despite sometimes saying the words “viewer warning” before striking, O’Reilly aired the footage multiple times with nowhere near enough time for a sensitive viewer to scuttle out of their living room. Flashing the words “viewer warning” under a video obviously depicting a shooting seems to add insult to injury, though, again, to O’Reilly’s credit, he did not give an opinion on this, and he reserves the right to believe that airing the video is the right way to go. Yet if he does believe that, why make such a big deal about the fact that he “told you what was coming”? The intent seems to have been to ask the question without tainting the viewer with any prejudices– or perhaps O’Reilly is torn about whether the footage should air himself– but whether he is torn or not does not provide license to have it both ways.

The accumulated clips from tonight’s Factor via Fox News below: