Bill O’Reilly To Barbara Walters: “You Didn’t Ask [Sarah Palin] If She’s A Lesbian, Did You?” 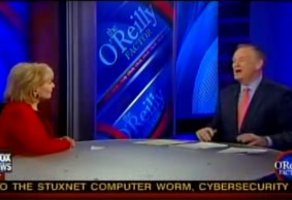 It was a packed night for Bill O’Reilly on The O’Reilly Factor: first he welcomed Rep. Charles Rangel, fresh off several ethics convictions, on the program (more on that later), and later spoke to Barbara Walters, promoting her “10 Most Fascinating people of 2010” special. Chief among the topics of discussion: Walters’ recent interview with Oprah Winfrey; specifically, Oprah’s emotional discussion of her own sexual orientation.

Walter told O’Reilly she thought her questioning of Oprah was appropriate, and also said she wouldn’t ask anyone about their sexual orientation if she thought they were trying to keep it a secret (to which O’Reilly responded: “Am I gay?”), and only brought it up because Oprah mentioned her relationships with both best friend Gayle King and significant other Stedman Graham. O’Reilly, though, didn’t like her line of questioning, and didn’t think anyone should be forced to answer such questions (Walters, for her part, didn’t think Oprah was forced to answer anything).

O’Reilly also wondered why some of the “pinheads” on Walters’ “Most Fascinating” list – the cast of Jersey Shore, especially – were so fascinating, anyway. Of course, the topic of Sarah Palin came up, and while Walters resisted the notion that Palin simply made the list as a token conservative, O’Reilly had a bigger question: “You didn’t ask her if she’s a lesbian, though, did you?” He was really proud of that crack, while Walters just said, “Stop giving me a hard time, Billy.” There’s no denying O’Reilly and Walters have an amusing rapport, and it certainly went way, way better than this. Video of their exchange, via Fox News, below.