Bill O’Reilly To FCC: “As MC Hammer Would Say, You Can’t Touch This” 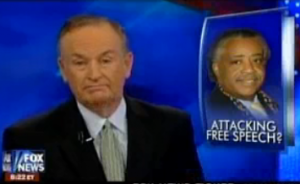 Stop! Factor Time! In a discussion over Al Sharpton‘s attempts to have the FCC regulate “standards in regard to race and gender on publicly regulated TV and radio,” Fox News Channel host Bill O’Reilly told Megyn Kelly how happy he was to be on the private airwaves, beyond the reach of government. O’Reilly laughed, “as MC Hammer would say, you can’t touch this. I’ll do a little dance.”

Before that dance came discussion of the complicated and confusingly titled subject of net neutrality. Yesterday the FCC approved new rules preventing the telecommunications companies from favoring or discriminating against any legal Internet content and services. Such government-imposed regulation to keep the Internet “neutral” is favored by many so as to prevent big companies like Comcast, Verizon and Google from ever being to able block access to content from rivals or to software which they might not approve. Most Republicans oppose such regulation fearing it will disrupt the competitive free market nature of the Internet and argue that the Internet is not broke, so why is the FCC attempting to fix it?

O’Reilly, as of now, doesn’t have a “big beef” with net neutrality, which actually shouldn’t be too much of a surprise, since in the past he has shown a distrust for the motives of big corporations, particularly skeptical of oil companies claiming their record profits were evidence that they price-gouged Americans. Kelly was more concerned with net neutrality warning that it’s a possible slippery slope where “before you know it, the government is controlling what’s on the Internet.”

What concerned O’Reilly more was thwarting Sharpton’s efforts, saying there should not be “any government intrusion or censorship in the media at all.” Rush Limbaugh’s satirical song, “Barack The Magic Negro,” based on a column by liberal journalist David Ehrenstein who first used the “Magic Negro” phrase, is what Kelly suspected most angered Sharpton. But FCC commissioners better not even think about regulating O’Reilly, because if they do, he jokingly promised to go to their house and . . . possibly subject them to his “little dance?”