Bill Richardson on MSNBC: Kim Jong-un Has Been a ‘Victim’ of Bad Press 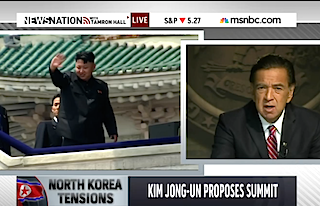 Just hours before the Obama Administration imposed new economic sanctions against North Korea in retaliation for that country’s alleged hack on Sony Pictures, former New Mexico Governor Bill Richardson said on MSNBC that he believes Kim Jong-un has been a “victim” of “bad press” and “bad international attention” over the last weeks and months.

Richardson, who has made multiple diplomatic trips to North Korea, was responding to the news that Kim Jong-un, in his New Year’s address, has proposed a summit with South Korea for the first time since 2000. While he said Kim’s call for the summit is “inconsistent” with his actions, he said it is “significant” nonetheless. “I wouldn’t put a lot of stock in North Korea making a lot of concessions,” Richardson said.

“He has been the victim, Kim Jong-un, of a lot of bad press, a lot of bad international attention, with the Sony hacking, with [being] taken to the International Criminal Court by some U.N. countries, a number of other very destabilizing moves that he has made, shooting the missiles, nuclear testing,” Richardson continued. So perhaps, he added, he’s trying to start the new year with a “positive step.”

Richardson also threw some skepticism on the FBI’s assessment that North Korea is wholly to blame for the Sony hack, saying he believes they may have played some part but said authorities should also be looking to China.