Brass Ones: Romney Camp Brags About Denouncing Intolerance, But Not Of Gay Former Advisor 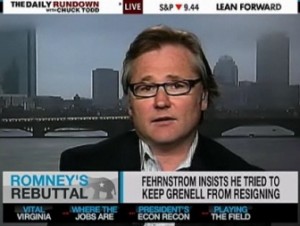 In a week full of nervy moves by the Mitt Romney campaign, the most shameless display of balls since New Year’s Eve has gone virtually unnoticed. The presumptive Republican nominee has taken a lot of criticism for failing to denounce the anti-gay voices that ostensibly drove openly gay advisor Richard Grenell to quit quit the campaign, Romney senior advisor Eric Fehrnstrom, appearing on Chuck Todd‘s The Daily Rundown, made a hilarious attempt to turn those lemons into lemonade by casting Romney as a warrior against intolerance.

In all fairness, Fischer probably deserves the cojones of the week prize for blasting a guy for being pushed around…by him. But the bit of 3-Card Monty that Fehrnstrom tried on Chuck Todd edges him out for sheer absurdity. Asked if pressure from social conservatives had played a part in Grenell’s departure, Fehrnstrom wouldn’t speak for Grenell, but said it was “unfortunate” that “voices of intolerance expressed themselves during this debate.”

Then, Fehrnstrom dropped the bomb. “Mitt Romney has confronted those voices of intolerance.”

What the Fehrnstrom is he talking about? The campaign has said they tried to get Grenell to stay, that they wanted him to stay, but when did Romney speak out against Fischer, et al, for hounding Grenell out of his job?

Fehrnstrom explained, “He did it last October on stage at the Values Voters Summit and denounced some of the poisonous language that is being used by some of the same people that had criticized Ric Grenell’s appointment.”

I think it must have zoomed right past Chuck, because he didn’t immediately spit his drink. Fehrnstrom was trying to get Romney credit for sticking up for Grenell by pointing out that he had stood up for himself. That’s like saying “I know I didn’t save that drowning kid, but I do have a long record of swimming safely to shore.”

Of course, this is also the week that Romney again told reporters that any president, “even Jimmy Carter,” would have greenlit the bin Laden raid, even though Romney is the only candidate on record saying that he opposed a unilateral raid into Pakistan to get Osama bin Laden. Funny how socialist Romney gets when it comes time to divide the credit.

Unfortunately, the rare mainstream media reporters who ever get close enough to Romney have, so far, allowed him to get away with this garbage, failing to confront the candidate with his own words. I realize that this can become exhausting with Mitt Romney, but that’s the job.