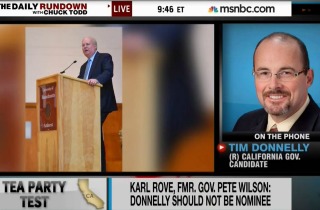 California Republican gubernatorial candidate and tea party supported Assemblyman Tim Donnelly (R-Twin Peaks) appeared on MSNBC on Tuesday where he was asked about the opposition he is facing from establishment Republicans like Karl Rove. Donnelly unloaded on Rove saying that he is the “architect” only of the destruction of the conservative movement. He added that “tyranny,” not Democratic Party members or politicians, is his only true enemy.

“Karl Rove has said that it would be very problematic, not just in California but across the country, if you are the Republican Party nominee for governor,” said Washington Post reporter and MSNBC fill-in host Chris Cillizza. “Why is he wrong?”

“Karl who?” Donnelly replied. “Oh, you mean the architect of the destruction of the conservative movement.”

RELATED: Karl Rove: Only Thing New in Obama Speech Was the ‘Straw Men’

“If Karl Rove is against me, then the people are with me,” the Republican assemblyman continued. “Because he is – I wear his opposition as a badge of honor.”

The GOP candidate said that his is opposed by Rove and others because he cannot be controlled by the Republican Party brass. Donnelly added that the GOP has been nominating “people who are out of touch,” and his campaign aims to change that dynamic.

“Democrats are not the enemy,” he concluded. “Tyranny is the enemy of freedom.”

On Tuesday, Donnelly faces off against former Treasury Assistant Secretary Neel Kashkari in the GOP primary to challenge Democratic California Gov. Jerry Brown in the fall.