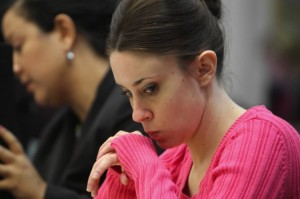 Casey Anthony reportedly told her psychiatrist Jeffrey Danziger she believed her deceased child, Caylee, was conceived after she was raped at a party, according to newly released documents. She claims someone “may have drugged her” and that she “woke up unclothed bottom,” and had no idea of the identity of Caylee’s real father.

According to ABC News’s Christina Ng:

Over the ensuing years, Casey Anthony named several people as possible fathers for Caylee, including her boyfriend at the time, a man she made up and a man she said had died.

When Anthony realized she was pregnant, she said her family did not even notice she was putting on weight for several months.

Eventually, Anthony did discuss the pregnancy with her mother and she told Weitz they had conversations about abortion, but he said Anthony “was very clear she never considered an abortion.” He said she had also ruled out the possibility of putting Caylee up for adoption.

Weitz said the pregnancy became very meaningful to Anthony, especially when she realized she was having a daughter.

“I think that has something to do with the nature of her relationship with her own mother,” Weitz said. “Having a daughter was important. It was significant to her. She said I loved her at first sight, and that child was the most meaningful part of my life for three years. That to me is important.”