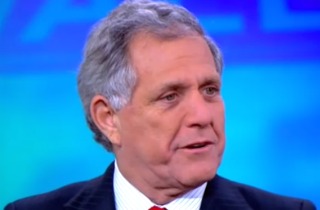 The former arose because of what Harris himself told Howard Stern. The latter came about because 1) McHale had been rumored as a contender for Craig Ferguson‘s timeslot (and now that Community‘s been axed, he’s free to do it), and 2) because Moonves’ wife Julie Chen took a photo of the two of them and McHale yesterday, which set off people’s alarm bells, especially Norm MacDonald‘s. The SNL alum essentially conceded defeat yesterday, even as his fans have been campaigning on Twitter for him to get The Late Late Show with the hashtag #latelatenormnorm.

Moonves said that Harris’ claim was “not exactly true,” explaining that CBS simply chatted with the How I Met Your Mother star about “possibilities” that would keep him in the CBS family. The possibility of him replacing Letterman or Ferguson was thrown out there, but “he wasn’t offered it,” Moonves claims.

As for McHale, Moonves said it was just an innocent picture, nothing more. He said, “There are no conversations underway, Joel McHale is a wonderful talent… but there was no discussion about 12:30.”

You can watch Moonves address Harris’ claim here, via Bloomberg:

And here’s the video of Moonves dismissing the McHale rumors: