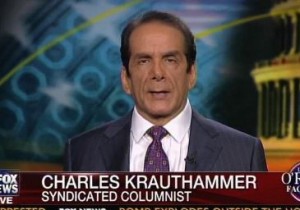 Charles Krauthammer has not indulged in the conservative outrage targeted at President Obama over the reverend at his Easter Sunday services, who decried “captains of the religious right” in his sermon. At least, Krauthammer explained his position to Bill O’Reilly, and revealed that he agrees with O’Reilly on his commentary over gay marriage opponents needing to do more than “thump the bible.”

Regarding his lack of outrage over the reverend’s comments, Krauthammer said he just ignores all the attacks from liberals and conservatives, because “otherwise you’re going to spend your whole time in response.” He argued conservatives should feel obligated to speak out when they find themselves at odds with conventional wisdom.

RELATED: Krauthammer Gives Obama ‘A Pass’ On Easter Sermon: ‘I Put It All On The Reverend,’ Not The President

O’Reilly asked Krauthammer about his own comments that put him at odds with conservatives: his assertion last week that gay marriage opponents need to do more than “thump the Bible” to win the argument. This earned O’Reilly ire from Rush Limbaugh, who hit O’Reilly for marginalizing his audience. Krauthammer, however, told O’Reilly, “You wee right to say it.”

Krauthammer explained that he respects the beliefs of anyone who says they oppose gay marriage because of their Biblical beliefs, but in the policy sphere, he said that’s simply not enough. He argued that if they want to expand their base and make a compelling case to people, “you have to go outside the narrow bounds of your own religion.”