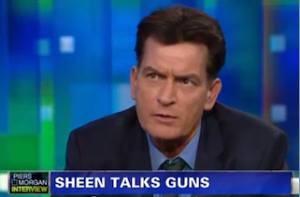 For most of 2011, Charlie Sheen was the most reliably unhinged talk show guest in America. More recently that distinction has belonged to Alex Jones.

The last time Sheen sat down with Piers Morgan in February of 2011, he pulled out his drug test results to prove his sobriety. But in this preview for Friday night’s edition of Piers Morgan Tonight, Sheen takes a much more measured approach in his reaction to the Sandy Hook shooting and its aftermath, while still displaying some of his signature bravado.

“If anybody from the NRA wants to look those parents in the eye from that school and tell them that guns are still necessary, then I urge them to, and see how that goes,” Sheen began. “Because we’re not supported to bury our children.”

Speaking about his own history with guns, Sheen said, “I was not a hunter, but I was a target shooter and more of a weapons collector.” But he admitted that as of now those days are behind him. “Then I had a domestic [abuse charge] and they took them all away and I haven’t gotten them back. I have a security team that’s pretty well armed.”

Despite his anger over the recent mass shootings and harsh words for the NRA, Sheen evidently finds a lot of value in personal gun ownership. “I miss shooting. I had an underground range at my house and I would go down there and spend hours. It was very zen for me,” Sheen told Morgan. “They were tools for what I was using them for, not all the negative stuff.”