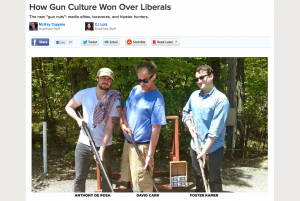 On Thursday, BuzzFeed’s McKay Coppins published a story entitled “How Gun Culture Won Over Liberals” — which features “Twitter -savvy media types” and their trips to the shooting range. Among the three who are specifically highlighted in the story, however, two have already criticized Coppins’ portrayal.

In the story, Coppins, who shares a byline with CJ Lotz, observed that, “Hunting and recreational shooting, once viewed by the left as backwater pastimes, have won over a liberal coalition of eco-conscious locavores, hipster hunters, and adventure-seeking New York media elites.”

Complex magazine’s Foster Kamer, The New York Times‘ David Carr, and Reuters’ Anthony De Rosa are among those media figures — and their trips to shooting ranges. Kamer is the leading character in the story, which features quotes from him such as, “Sometimes we go bowling, sometimes we eat together, and sometimes we go shooting. It’s something to do.” The text is paired with a photo of the three standing side-by-side, holding rifles.

Kamer quickly and bluntly responded to the story on Twitter, deeming it “hack work.” 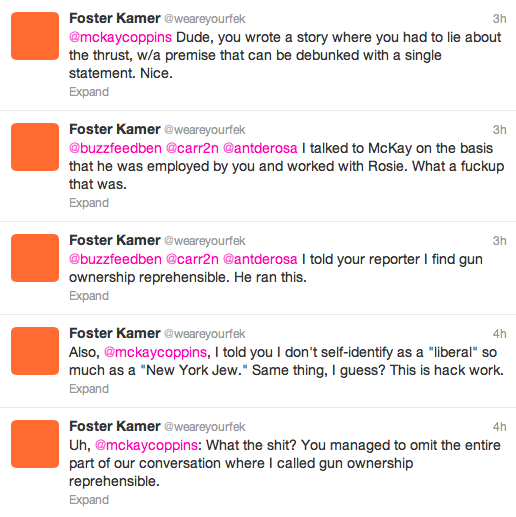 He further spoke to The Wrap about the story, noting that the “nuanced” views he conveyed to Coppins never made it into the story — and that Coppins “chose to so carefully edit the selection of my quotes for him.”

Similarly, De Rosa said the quotes he provided weren’t included in the story. In turn, he published his own statement, wherein he said, “I’m not a gun owner, but I am someone who I guess has a nuanced view of gun control which probably doesn’t satisfy conservatives or liberals.” He pointed to an Atlantic post on the BuzzFeed story, deeming it “a far more accurate account” of their trip to the shooting range. 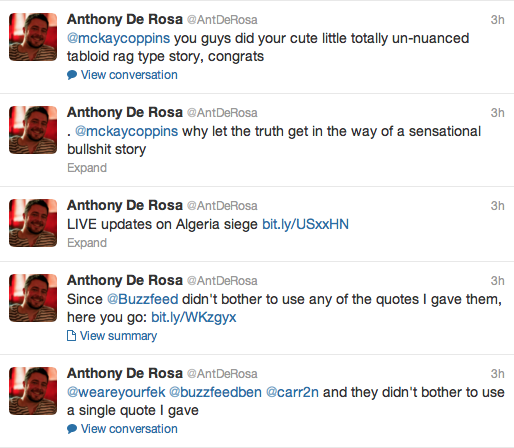 That piece asserts that “gun nuts don’t do irony.” You “can make the case that some New York media people play with guns because they think it makes them look cool.” But “you cannot say that a few New Yorkers ironically tweeting about this one time they shot a gun is evidence” that gun culture is gaining a foothold among “coastal elites.”